I realize these regency-period romances are no more alike one another than gangster pictures or slashers or shoot-em-ups o westerns, and that they deserve no more or less consideration than sibling genres, but here in The Man in Grey — as with Peter Ibbetson and Queen Christina and Wuthering Heights and Camille — I was just eager for the thing to end. It was definitely more engaging than those other three, with James Mason and Margaret Lockwood (whom we last encountered as the lead of Hitchcock’s Lady Vanishes) commanding their respective roles with different but equal kinds of odium, it wasn’t so interesting that the two-hour runtime didn’t feel like three.

What helped to shoehorn me into the action, at least, is that the movie begins in the modern day with two English people meeting at an auction of heirlooms belonging to the Rohan family, to which these two attractive strangers (played by Phyllis Calvert and Stewart Granger) are connected.

Then we get a flashback to the 1800s, I guess it’s two generations back, and though we’re focusing first on the odious Margaret Lockwood, arriving as the new teacher at a boarding school for girls, she soon crosses paths with a sweet wealthy student named Clarissa (also Phyllis Calvert, playing her ancestor).

That’s basically the Wiki summary. From there the characters go here and there, Clarissa is forced to marry the eponymous Man in Grey, played by James Mason, and they live together in frigid loveless matrimony while Calvert starts to get the hots for a stage actor who is also played by Stewart Granger (embodying the ancestor of his modern-day character).

So at this point it’s clear where this is going. Their unrequited love will end tragically and the movie, suggesting a triumphant fate, will reunite us at the end with their descendents in the modern day, who will go on to live happily ever after. Seems like no accident, either, that Stewart Granger’s modern-day character is dressed in a military uniform. It’s a big, expensive, visually-striking and atmospheric romance that’s powerfully acted, effectively upsetting, but also uplifting in a crafty way. A fairy tale ending that doesn’t feel outlandish but probably works to give its wartime British audience a two-hour reprieve from the burdens of the day.

I like the movie well enough and admire it, and dipping into it a second time just to skim and refresh my memory I’m pausing for longer stretches than I’d have expected, enjoying certain scenes more than I did the first time around. But I can’t get over this hump of dragging my feet through these initial viewings. I never get swept up in them as I do with certain comedies or adventure films (A Night at the Opera and Captains Courageous come to mind). The whole time I watch these romantic period pieces I’ve got an eye on the clock.

Sounds a lot like I’m just conditioning myself to dislike them, but I had the same mindset going into musicals back in the 1930s, with 42nd Street. I wasn’t exactly thrilled with the next one, Footlight Parade, but I was delighted with Love me Tonight and Gold Diggers of 1933 and, to a lesser extent, Swing Time and Top Hat. Wasn’t a big fan of war movies, either, and while the first one on the List, King Vidor’s Big Parade, did nothing to sway that disposition (even though the big battle scene at the end is impressive) All Quiet on the Western Front certainly did, and Sergeant York, and Mrs. Miniver in its own way. 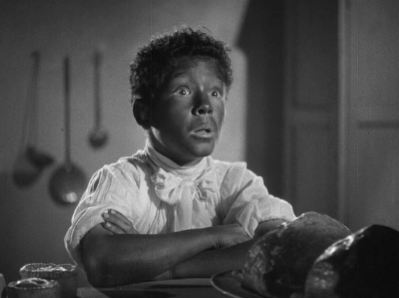 But these period romances just aren’t doing it for me. I had a decent time with Man in Grey because there was humor (supplied mostly by Granger), and the laugh-cringe shock effect of a young white actor in blackface playing Clarissa’s servant, and the drama of the third act — where Clarissa’s love has fled, and she herself has taken ill, and Lockwood’s chicanery reaches a murderous peak — was pretty gripping. So I can definitely recommend it to people who already like this kinda thing. If you’re like me, though, and not disposed toward this genre, it’s only gonna strike you as more of the same.

[Editor’s Note from the Future: I do ultimately find a couple period romances that ring my bell. Mostly in the 1950s.]