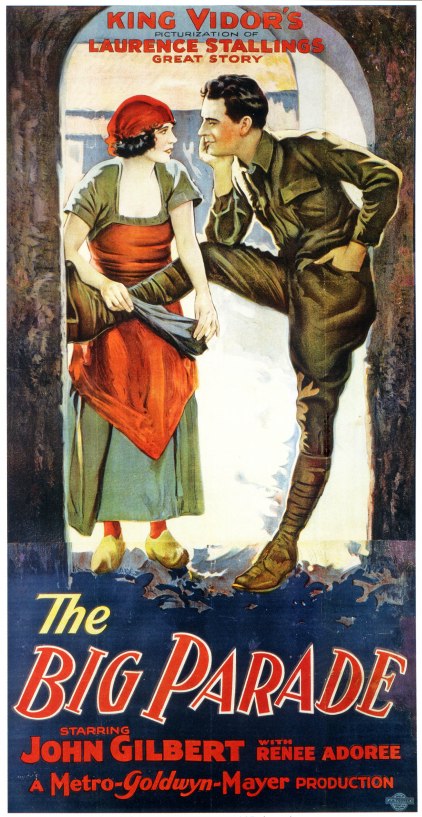 I really disliked (probably hated) the first two-thirds of this movie, which seemed like it was meant to be a comedy, except that it wasn’t funny and the leading characters were loathesome and almost every scene felt like it ran fifteen seconds too long. But then the third act happened, and the third act was great, and the movie shifted some major tonal gears so that what had appeared to be a romantic comedy, set against a backdrop of World War I, reveals itself to be an honest meditation on the horrors of war.

I wasn’t in a good mood when I sat down to watch this, though, so I should maybe give those first two-thirds another chance. I had just gotten home from dinner with a friend, her birthday, and she cried from basically the moment we sat down to the moment we left because she got dumped recently. She and her girlfriend were together a long time. Then we got a drink afterward and there at the bar, halfway into the pitcher, her phone buzzed with some well-meaning email from a friend of a friend and she started bawling as she read it. Couldn’t be stopped.

There was a while after the breakup where she did this every day. That was a few months ago. It tapered off eventually, she sobered up, and for a while she was out and about with friends, putting her life back in order. Now it looks like she’s back to square one for some reason. And I know it’s shady to turn the attention onto myself but she’s putting me in this situation that maybe you’ve dealt with too which is that you’ve got this friend who’s going through a really hard time, maybe harder than you can imagine, and so you sympathize for her and want serious for her to feel better…but then you start getting angry. Because she’s so sad. Not that she doesn’t have a right to be this sad, not that it doesn’t make sense. It’d be weird if she wasn’t. But this friend of mine is almost a year out of this breakup and you’d think it happened yesterday. Ahdunno. I was in this weird mood of feeling extremely bad for her, but also feeling kinda pissed that she was still so fucking sad. Then it gets even muddier because I start getting angry at myself for being so impatient with her feelings. (And also what I think I need to admit to myself is that I’m still really upset about her breakup for my own complicated reasons, I won’t get into em here, and it isn’t pleasant for me to hear her talk and weep and pity herself about it every time we hang out.)

But that’s whatever. Off to the side.

As for the movie: it’s about a rich kid named James Apperton (John Gilbert) who’s arrogant and entitled and dependent on his parents. He enrolls in the army and there he befriends two other guys, Slim (Karl Dane) and Bull (Tom O’Brian), the first being tall and skinny while the other is short and fat. Both are goofy. Both are also rude and entitled and actually all three of them, our hero included, make a sport of harassing the French woman, Melissande (Rene Adoree), with whom our protagonist ultimately falls in love. Eventually war starts happening and my experience of the movie went from near-hated to tolerance and maybe finally affection toward the end.

I do think, in retrospect, that the audience needs to hate these characters at first in order to feel that sudden concern for them at the end. That weird emotional shift where you’re like, “Fuck, I hate these guys…but nobody deserves this.”

But yeah: an interesting movie, in theory. Apparently it was MGM’s biggest success up to that point?