I’m writing this at an Irish pub in the Gables called John Martin’s (it’s my favorite bar but too expensive to make a habit of) and I’m feeling guilty because the whole reason I came out to the Gables today, which is like a half-hour drive from my house, was to see a movie, Manchester by the Sea, at their little art cinema. I started feeling wishy-washy as I walked up to the box office, though, and then decided to just hang out instead, drink and write. This is a productive alternative, it’s fine, but Manchester by the Sea is said to be like this devastatingly sad and artful movie with strong performances and great directing and Oscar buzz. The kind of dark miserable art that builds character. There’s a feeling like I’m approaching an assignment, something arduous but rewarding.

But I’m also inclined to forgive myself for skipping the movie because I really have been watching a ton of them lately. They aren’t just 100% recreational anymore. I’m starting to feel the occasional strain of obligation as I sit down to watch something from the List. That disenchantment was strong last night. I got home feeling beat from a ten-hour shift at the restaurant and was supposed to watch Mutiny on the Bounty since it was next on the List, but it was also two and a half hours long. So I went to the next one, Top Hat, a lighthearted musical with a 90-minte runtime. But even then: as the title card bloomed onto screen I felt like I was settling in for an extension of the ten-hour workday I’d just gotten home from. But, after a few minutes, the feeling subsided. 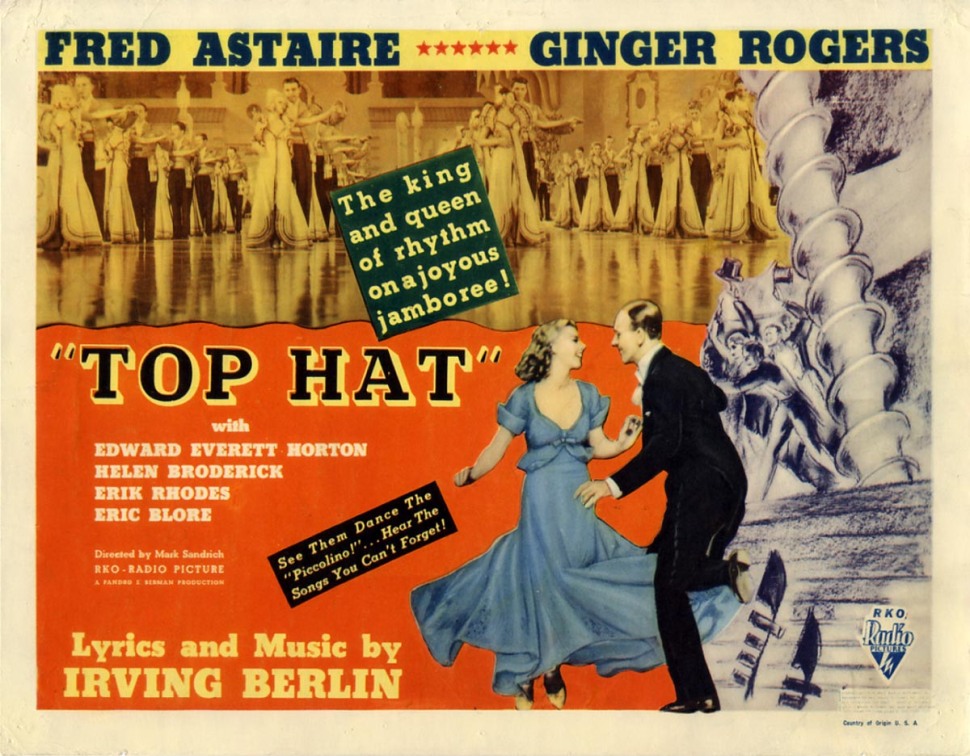 Top Hat’s opening scene sets some light comedic tension around our leading men, dressed in tuxedos, sitting stoically in the reading room of some fancy hotel or country club that requires absolute funereal silence. Even a cough, or the clinking of glasses, is met with a whip-like glance from all in attendance. Fred Astaire’s discomfort is palpable. The humor of it, all these stuffy guys taking their silence so seriously, kinda made me reflect on my situation: so serious and dour about the “task” of watching movies. Sure, there’s an element of responsibility here, of dedication to the Project, but it’s hardly a struggle. (Except for Les Vampires and Napoleon and Limite. Those were struggles.)

I didn’t realize, while watching 42nd Street or Footlight Parade or Gold Diggers of 1933 that Ginger Rogers was Ginger Rogers. I knew the name, I mean, but not her face, and I would never have expected such a marquee name to have appeared in such marginal roles as she does in those early Berkley musicals. I was kinda – is this the right word? – proud to see her as the star here, alongside Astaire, and to remember being hypnotized by her dazzling closeups, as a supporting player in Gold Diggers. She doesn’t have a great deal of screen time in that one, but she’d cultivated a magnetism over the past few years that beams through the screen whenever the camera gives her a moment.

There’s a song and dance bit toward the end here, played to “Cheek to Cheek”, that is so beautiful, so golden-era Hollywood, so romantic I replayed it three times before moving forward.

What did make me cringe, and always does, is the fact that Top Hat is one of those comedies where everybody’s emotions are being manipulated by a prolonged misunderstanding. Anybody can tell from the first few minutes that the movie’s gonna have a happy ending, but still, I get really worked up and distressed by how the simplest misunderstanding can be causing so much trouble. It’s a good movie but, in that respect, stressful to watch.

Stressful, however, is about the worst thing I can say about it. There’s great artistry and skill on display here, in the dancing and music, but it isn’t the sort of thing I’m equipped to talk about at length. For my own purposes it worked to charm me out of a funk, remind me for an evening that if the Project ever feels like a slog it’ll be because of something in my disposition. Reminded me that movies are fun.