It only costs a dollar to rent The Seventh Victim off of Amazon’s streaming service. I usually pay $3.99. Also, there’s some beautiful poster art available for the movie if you do a quick Google search, and normally you’ll see that kind of art displayed on the Amazon page to hook your eye, but instead, when renting the movie, all you see is a solid black square with the movie’s title embossed in cryptic lettering.

The usual rental allows 24 hours to finish watching your movie.

This one allows seven days.

The Seventh Victim isn’t very good, and it’s so short it feels more like a TV special than a film, but it’s got some style in the photography, and it’s neat to see the intersection of horror and noir. What’s strange about watching it on Amazon with all these sales details (super cheap, no cover art, “take all the time you need”) is that I felt like I was pulling something out of a bargain bin. The flimsy display had an influence on how I approached the movie.

I think I was expecting it to suck. 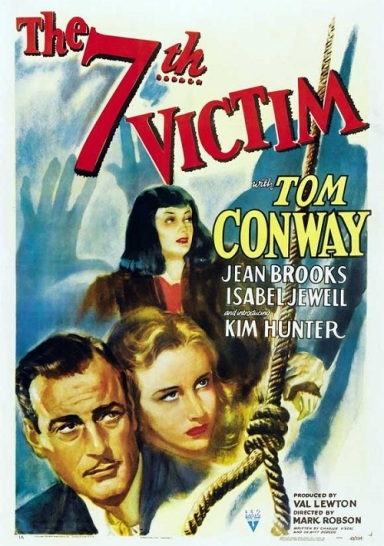 It’s a super-grainy thriller about a young woman named Mary (Kim Hunter) who leaves her all-girl boarding school when she learns hat her sister, Jacqueline (Jean Brooks), has disappeared. During Mary’s slightly noir-ish investigation we meet a smarmy private detective with something like a heart of gold, and a fedora too, upon their quest for answers when a murder complicates the picture. The setting of that murder is creepy, the tension is high, the camera’s movement and the use of shadows are great.

It’s a strong adherent to formula, well-executed and charming with a sort of metropolitan gothic vibe – it’s a fine way to pass the hour. The ending is also quietly beautiful, sad, moving. Too nuanced for me to even understand at first. I turned to my friend looking puzzled as the screen faded out and she had to explain it to me.

There’s a ridiculous depiction here of a murderous Satanic cult – one which, as the likes of Jim Jones and Manson would surely attest, appears to lose all resolution in hailing its cloven-footed king when somebody reprimands them for their devilry, invoking the lord, and walks briskly outta the room.

It’s a bizarre little movie whose intrigue is born out of puzzling over what the filmmakers were trying to do. Was it a cash-grab amalgam of genres and tropes? Would a cynical cash grab have such flourishes of craft? Surely it wouldn’t go with such a sour ending if its goal was to tickle a crowd.

Seventh Victim is one of the movies that takes my head out of the List and makes me wonder what the editor, Steven Jay Schneider, is trying to accomplish. Would he ever put a bad movie on the List? Maybe a teachable disaster, like Godfather III?

What does he figure a person is using this List for? Suggestions for what to watch on a rainy Sunday? A good romp? Did he assemble this List anticipating the few thousand people like myself who plan to use it as a roadmap and checklist? Cuz that latter group might appreciate watching and considering a bad movie, tryna figure out what went wrong, whereas somebody who just wants a good movie to watch probably wouldn’t be so thrilled.

But Seventh Victim doesn’t trike me as all that good, and if it’s impressionable at all it’s only insofar as I’m wondering why it’s on the List to begin with. Wondering, frankly, why Amazon even has it.

The existence of the movie online, with its lackluster presentation, is interesting to consider. A perfectly solid work of art that fell, with time, off the boat of public interest and into (undeserved?) obscurity. Seventh Victim is enjoyable for ambiance more than anything. It’s got a vibe like the horror stories I used to write in middle and high school. Condescending as it feels to call a movie “cute” when it’s trying to be something else, that’s exactly what this movie’s low-budget earnestness amounts to. 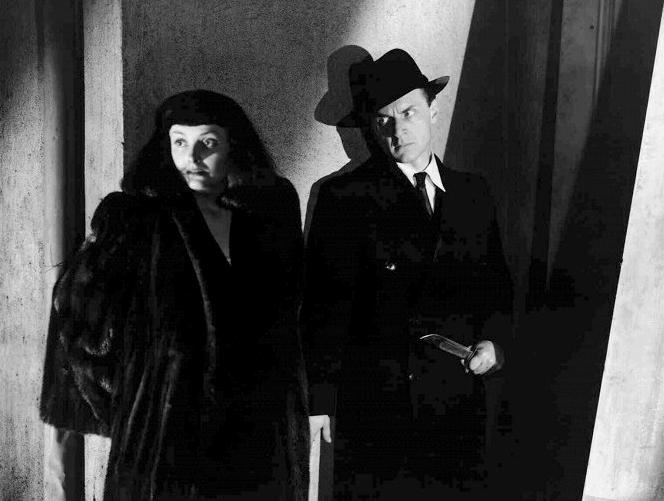 I appreciate that it’s well made, that a lot of people in this production really cared about what they were looking on, and now I’m wondering: seventy years have passed, it’s entertained a great many people, and now it’s fading away. It’ll only become harder and harder to find. Should that disappearance be mourned? Should the huge undertaking of everybody involved be memorialized somehow? Or should we just let it slip away as the world loses interest?