Even on the rare occasion that I found myself flush with cash as a teenager I was always reticent to spent $20 on a DVD. Like I could never just pop in, grab the box, pay for it and leave. I’d grab it and meander. Read all the text in the back and scrutinize the special features. When I got a smart phone I’d run searches of customer reviews. I never bought Psycho but I did stand with the box in hand at Best Buy on at least three or four occasions, telling myself I should go home with this cuz there was probably something in my future that’d draw me back to it.

But I’d set it down again and pick up something else. Later on, sure enough, I had to write something about it for a lit class as a college freshman. So I rented it for $4 and lamented that I could’ve already had the disk at that point.

Then I had to write about it again in my junior year for that oft-mentioned Hitchcock class and, again, hated myself for not owning it.

So I’d be frustrated when I sat down with it, wishing I owned the disk and not having enough money to go buy it, but the frustration never lingered. The movie kept showing me something new. Something I hadn’t noticed before. There was some stuff that needed to be pointed out to me, like with that first professor who talked about the slice-like animation of parallel lines through the opening credits, and the way that the first shot has a camera drifting, voyeur-like, through the slatted blinds of a window concealing two lovers in a secret embrace. But even on my own, without all the tools for interpretation that you pick up after a few years of study, the movie just hands you some of its secrets with each successive viewing. Becomes more familiar and fluent and cool.

But, being a teen and then a twentysomething who filtered his opinions through a net of popular consensus, I thought it was lame to say that my favorite Hitchcock movie was also his most famous. So, eliminating it from the equation, I figured at the end of college that my favorite of Hitchcock’s movies was either Blackmail (which I got to rave about some hundred titles ago on the List) or Shadow of a Doubt, his first American film and, if we’re to believe what he says in that Dick Cavett interview, Hitchcock’s personal favorite of his own films.

Shadow of a Doubt is about Uncle Charlie, played by Joseph Cotton, who’s taken up a hobby of murdering wealthy widows in exchange for what we’re to believe, at first, is the simple monetary perk, with maybe a predictable killer’s thrill (tryna remember now where I recently heard some intellectual say, so matter-of-factly, that we oughta come to terms with the reality that murder is apparently one of the greatest thrills on earth, if you’re wired a certain way, and that it’ll never stop happening and peace is a fantasy, etc…), but we find out soon enough that these murders stem from a kind of high-brow misogyny. On the lam, cops closing in, Charlie goes to visit with his sister (played by Patricia Collins, in her early fifties at this point, looking twenty whenever she flashes that gigantic luminous smile) and her children in a quintessentially American small town. There, he gets close to his eldest niece, also named Charlie and played with pep and brooding nuance by Teresa Wright. She idolizes and adores her uncle, her namesake, but it makes her no less savvy to the clues about his crimes. And in the third act, when they’re standing as adversaries under the same roof, each harboring Uncle Charlie’s secret, Wright goes from the perky all-American girl to something like Schwarzenegger in the last act of Predator. A cunning survivalist.

The “high-brow” misogyny I mentioned above, the simple hatred dressed in eloquence: Hitchcock hands the movie to Joseph Cotton with two outstanding monologues, both giving voice to his fatalistic, self-aggrandizing, sneering misogyny and, in the second one, overall misanthropy. The first, during a placid dinner with the family, is a dead-eyed soliloquy about wealthy widows who devote their final years to senselessly spending the money their husbands worked so hard to earn. (“…drinking the money, eating the money. Losing the money at bridge, playing all day and all night. Smelling of money. Proud of their jewelry but of nothing else. Horrible. Faded, fat, greedy women.”) In the second monologue, after Wright (whose character the internet refers to as “Young Charlie”) has discovered her uncle’s crimes, he drags her into a bar where they’re waited on by one of Young Charlie’s former classmates, and he unfolds this wonderful screed about the world being a sty.

“There’s so much you don’t know. So much. What do you know, really? You’re just an ordinary little girl living in an ordinary little town. You wake up every morning of your life and you know perfectly well that there’s nothing in the world to trouble you. You go through your ordinary little day and at night you sleep your untroubled, ordinary little sleep filled with peaceful, stupid dreams. And I brought you nightmares! Or did I, or was it a silly inexpert little lie. You live in a dream. You’re a sleepwalker, blind. How do you know what the world is like? Do you know the world is a foul sty? Do you know if you rip the fronts off houses you’d find swine? The world’s a hell. What does it matter what happens in it?”

Back when I took the class I wrote a response paper about the angularity of a shot’s composition, the motif of intersections and parallel lines throughout the movie, a visual representation of how the two Charlies are facing each other. Opposites. Worthy adversaries. And I still think that it’s interesting to look at and consider but what interests me more than the photography, coming to the movie slightly older, is the idea of Hithcock making this movie in the U.S. while riven with guilt about not contributing much to the English war effort. His home was being pummeled by Nazi shells and here he was living a posh life in the States, making a picture with celebrities, his ever desire tended and met. He felt like a bad Brit. Worse than that, he was separated from his ailing mother (with whom he had an unconventionally intimate relationship that manifests in the villains of several of his movies: Psycho, Notorious, Strangers on a Train among them) who also died while Hitch was in the middle of production.

This is the sort of angularity I was talking about. Imagery that shows, for instance, Uncle Charlie at the intersection of parallel lines.

More expressionistic imagery, this time suggesting imprisonment but also aligning Wright with parallel streaks. Streaks that tend to intersect when they appear on screen.

Hitchcock doesn’t appear to’ve ever thought of his mom as evil, but I do think there’s something of his grief at the loss of her that’s featured here in Shadow of a Doubt. What Young Charlie is dealing with now that she knows of her uncle’s crimes isn’t just the existential threat of his wanting to kill her, it’s the loss of a role model. As her uncle’s namesake, she’s also a kind of offspring. Doesn’t seem like much of a leap to say Hitch might be projecting some of his melancholy onto their dynamic. 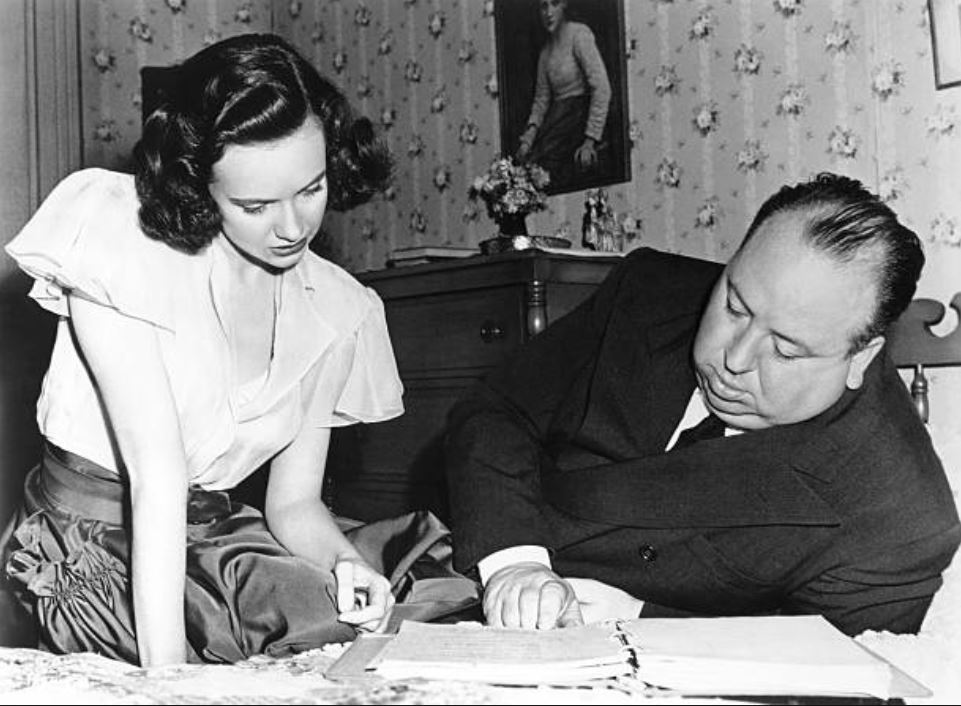 Anyway. Shadow of a Doubt is a terrific work that doesn’t quite live up to my memory of it, and it’s a bit slower in pacing than his early work, but that’s cuz he’s favoring character over story here. And that’s fine. But anybody looking to watch a Hitchcock movie for that trademark suspense, such as it might hold up for modern expectations, would be well-advised to look elsewhere.