I’ve got a second job now so it’s possible that by the time you’re reading this, somewhere in 2017, I’ll be in better financial straits. But at the moment, in September of 2016, I’m earning about $15 an hour at the college, where I can work for a maximum of 25 hours per week. They take a lot of money out of my paycheck for various reasons. Comes to about $520 per paycheck. Around there. It fluctuates. I don’t pay as much attention to it as I should. I also maxed out my credit card a couple years ago because I fell in love with somebody. I’m usually down to about $7 by the time payday comes around. 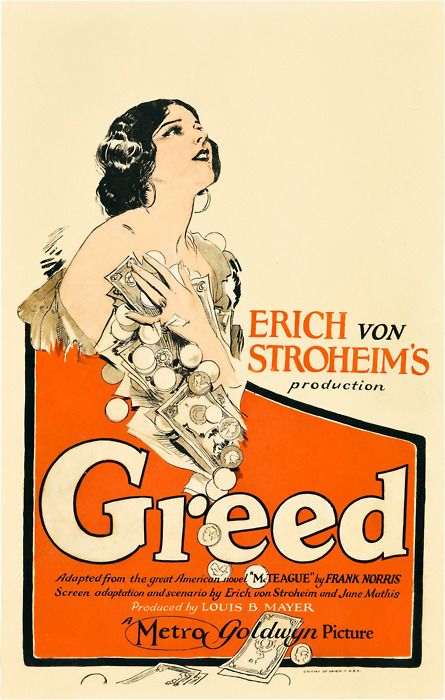 The sort of hardship depicted in Erich von Stroheim’s Greed is poverty, at first, and then destitution by the end, so of course it’s a little presumptuous to say that I can relate with some of these depictions of what it’s like to be really poor, and of the relentless humbling that comes of looking around at the bustle and lights of society and not being able to participate, but I did. There’s a lot of emotional weight in this movie, as I don’t think there is in Foolish Wives (the previous Erich von Stroheim movie on the List), but I’m not sure that Greed lives up to its legend.

If you’ve read two or three articles about Greed you’ll have read everything there is to say about the “tragedy” of its release. Von Stroheim spent a year filming it and came back with a nine-hour cut of the film that he showed to some friends. It was allegedly well-received. The studio said it was too long, however, and the movie was trimmed to roughly two hours and, in effect, stripped of two subplots involving a romance between two elderly neighbors, which turns out well, and another between two junkyard workers, which does not. That legendary nine-hour cut is lost, burned, so there’s no chance of a story like the one about The Passion of Joan of Arc, where the official version is lost for decades and then rediscovered in the broom closet of a mental hospital in Norway. That first cut of Greed is gone forever. What we do have, to compare against the studio’s alleged hatchet job, is a four-hour version that was pieced together with salvaged photos and lots of intertitles to fill the story’s gaps.

This four-hour restoration is the version I saw, and it’s a good time. More than I would have expected when, apart from its silence, there are whole scenes that don’t even feature movement. They’re slideshows of stills and text. But there’s something exciting about that. Piecing together a masterpiece from shards.

“If I talked to you…for three weeks steadily I could not possibly describe, even to a small degree, the heartache I suffered through the mutilation of my sincere work at the hands of the M.G.M. executives.” — Erich von Stroheim

Our main characters, Mac and Trina, win the lottery just before marriage (well, Trina does) but, succumbing to a stinginess that seems born partly from a terror of losing her fortune and, equally, a fetish for cash, Trina subjects her husband and self to a voluntary poverty whereby nothing can be spent. Cash must be hoarded. Mac is the opposite, an alcoholic spendthrift who, von Stroheim suggests, is a victim of the “evil” in his DNA. Complications ensue.

I’ve read lots of lamentation about the missing footage, people calling it the “holy grail” of cinema, but one of the things I’m learning from this Project is that directors like von Stroheim, like Able Gance and D.W. Griffith, probably benefit more than they suffer from having their ambitions reigned in by somebody else – whether by an editor, an executive, whomever – because, visionaries though they are, their allegiance is purely to the craft, to the film as its own entity, and if left to their devices they tend to make (point in case) four- and six- and nine-hour movie that will be praised by a few, for their mastery of spectacle and sprawl, but that’ll probably never connect with a sizable audience.

Or maybe I’m wrong about that. Probably I’m wrong about that. A lot of really forbiddingly esoteric works have passionate niche followings and it’s also very often the case that these passionate followers will claim that the esoteric piece of work not only changed their lives but also saved them. That the sensibility of book or movie or album in question is so eccentric, is in such weird harmony with their own, that reading or watching or hearing it felt like finding a companion in some bleak and lonely time.

So, sure, one can complain about this expensive and time-consuming work only making a splash with a very small audience – but it shook their world. Nonetheless: I think a big part of artistic genius has to do with an understanding of and consideration for one’s audience. A nine-hour movie is not considerate of its audience. Especially not in the fucking 1920s. This kinda thing might fly today, in the age of Netflix where you can pause the movie to eat and shower, but unless it was shown over the course of two days, in 4.5-hour volumes, that still meant your audience had to clear two full days from their schedule in order to take this in.

Or maybe that would’ve been a kickass way to spend a weekend. Fuck do I know?

Counterargument: What if the filmmaker is only tryna reach the very niche audience that has the stamina, the faith to sit through a nine-hour movie? Do you think Kafka was trying to appeal to the masses?

No, but Shakespeare was.

It’s a good one. Sure. Not every artist is cut out for the mainstream. I can even sympathize with the idea that mainstream popularity negates the legitimacy of an art work. A person’s voice will naturally be divisive among the masses, some will love it and some will hate it; therefore, if the overwhelming majority of people love something, it’s probably not a real voice.

But look at my point.

Counterargument: Shakespeare is a fucking superhuman phenomenon. You can’t use him as a model for every other artist.

Why not? Something to aspire toward.

I know that. And I’m not ignoring it –

Counterargument: That the richness of an oppressed person’s most cherished stories is often contingent on their oppressor not understanding those stories. The idea that nobody except a person suffering in that particular way can really understand what’s going on with it. Like a secret handshake.

I said I know.