This has happened several times now: I write an essay in a notebook, tell myself I’ll get around to typing it up int he master doc where I keep them all, and then not only do I never get around to typing it, I lose the fucking notebook. it’s infuriating. I’ve got eight or nine notebooks in my bedroom and spent nearly an hour paging through each one of them, looking for the My Darling Clementine essay, not finding it — and seething more than usual because I can see the essay, the 2.5 pages of it.

I’m a mess over here.

I remember riffing in the opening paragraph about how quickly the movie sets up its story, with Henry Fonda in the role of Wyatt Earp, a real-life sheriff in the town of Tombstone, which is where the infamous gunfight at the OK Corral took place — an incident that, as my friend Steve always hastens to say, lasted all of fifteen seconds.

But that doesn’t seem to’ve ever stifled a writer.  Countless movies and books have been spawned from it (I think there’s a few more on the List: Gunfight at the OK Corral and Tombstone).

But yeah: Fonda. My guy. He struck a good note in my mind when he first appeared as a brooding, boyish mannered southern gentleman in William Wyler’s Jezebel, and then he was even better in Grapes of Wrath and he played a nuanced coolness in The Ox-Bow Incident — which resembles My Darling Clementine not only cuz they’re both westerns but because they’re both so lean. 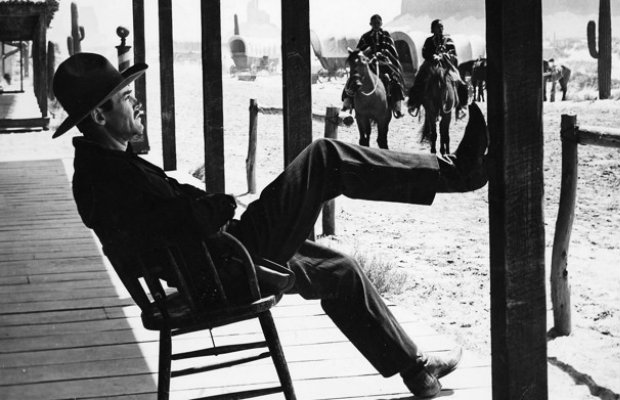 My Darling Clementine is directed by John Ford, who first appeared on the List with Stagecoach, maybe the greatest western ever made — a movie, incidentally, that Orson Welles is said to’ve watched a few dozen times during the production of Citizen Kane. He thought it was perfect. Wanted to make something of the same stature.

Ford, a precursor to Ridley Scott, was a master craftsman and a dogged workhorse of old, right up there with Alfred Hitchcock and Charlie Chaplin — a  guy who needed to work. And while he had a soft spot for more sensitive and sweeping pictures, like How Green was My Valley and Grapes of Wrath, he was a manufacturer mostly of tight, quick, well-paced and -plotted action/adventure fare.

My Darling Clementine is exactly that — for a while. Wyatt Earp wanders into town one night, steps up to subdue a drunk guy going wild with a gun, and is thereafter offered a gig as sheriff.

By the fifteen-minute mark we’ve got a vibe of who he is, waht he stands for, a vibe for the town and, amazingly, the well-set seeds of a revenge plot. Earp and his brothers were transporting cattle when they stepped into town, leaving their brother alone in the desert with them, and dealt with the drunk guy. When they return to their brother, he’s been murdered. When Earp gets to figuring who’s responsible he decides to use his badge as a means for revenge.

But things slow down after that. There’s a lotta drama involving Doc Holliday (Victor Mature), a disgraced doctor who drinks a bunch and seems to wanna die. 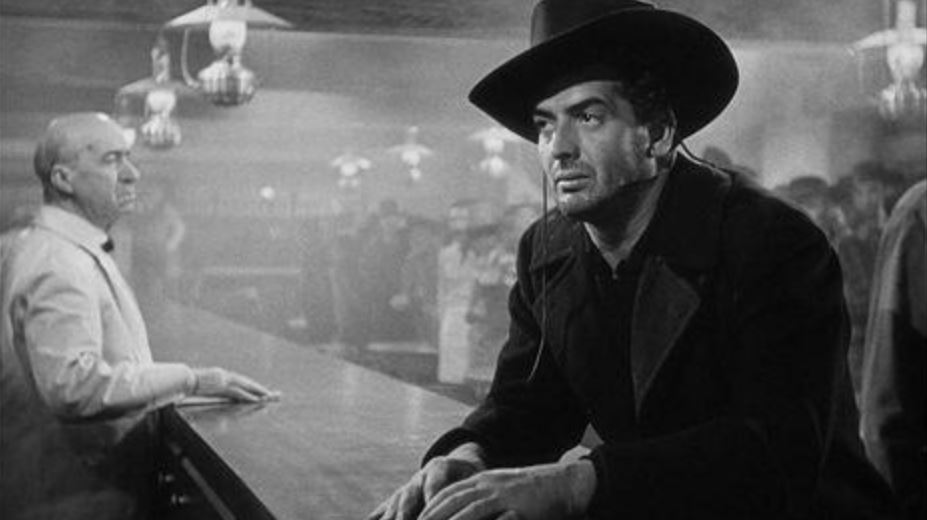 Notice how Ford likes adding depth to his shots. Even a close shot of a dude at a bar, if you look past him, is like a landscape

Movies from the ’30s and ’40s don’t usually offer much int he way of falling action. They usually hit their climax and then roll credits right after. This happens withwar pictures and film noir and mysteries but there’s something about a western, knowing that the movie’s gonna end in a shootout, that amplifies the tension (at least for me) to get the bullets flying. Kill the bad guy and let’s go home. We know that the drama will be quickly resolved with the pull of a trigger, so we start to yearn for it. It’s almost unpleasant. 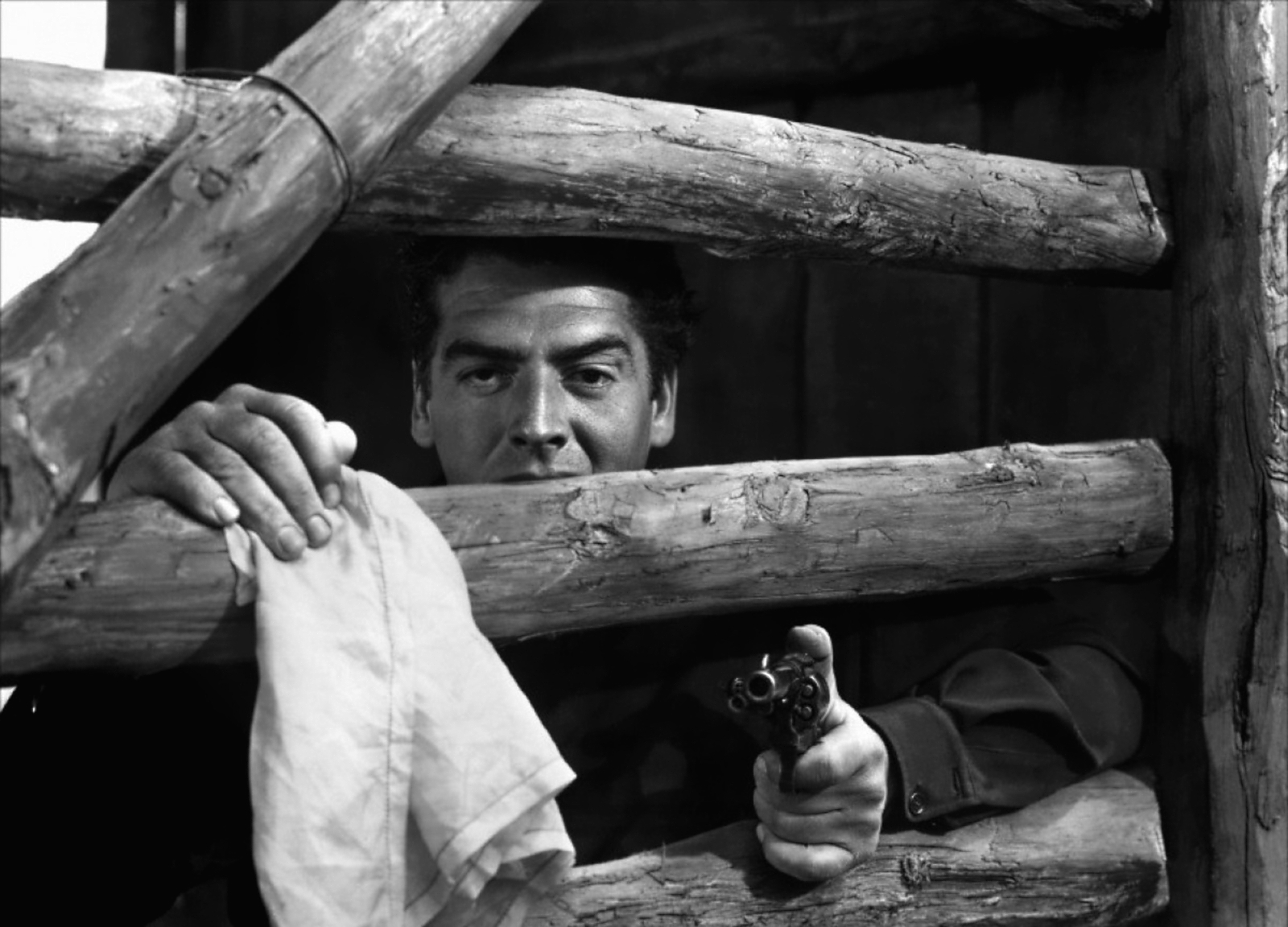 It’s kinda like the fifteen-minute patch of every romcom where teh lovers, usually because of a misunderstanding, get separated and hate each other and, knowing they’re destined for each other, I get super freaked out. Ahdunno if it’s quite that I’m afraid it won’t work out. It’s just…angst.

Anyway. There’s lots of angst and yearningto be had as My Darling Clementine escalates toward the big shootout (which goes on for considerably longer than fifteen seconds, naturally), and it’s a swell movie. It sets up a conflict and resolves it beautifully. That long shot of Earp walking down a deserted street toward the gunfight is one of Ford’s greats. 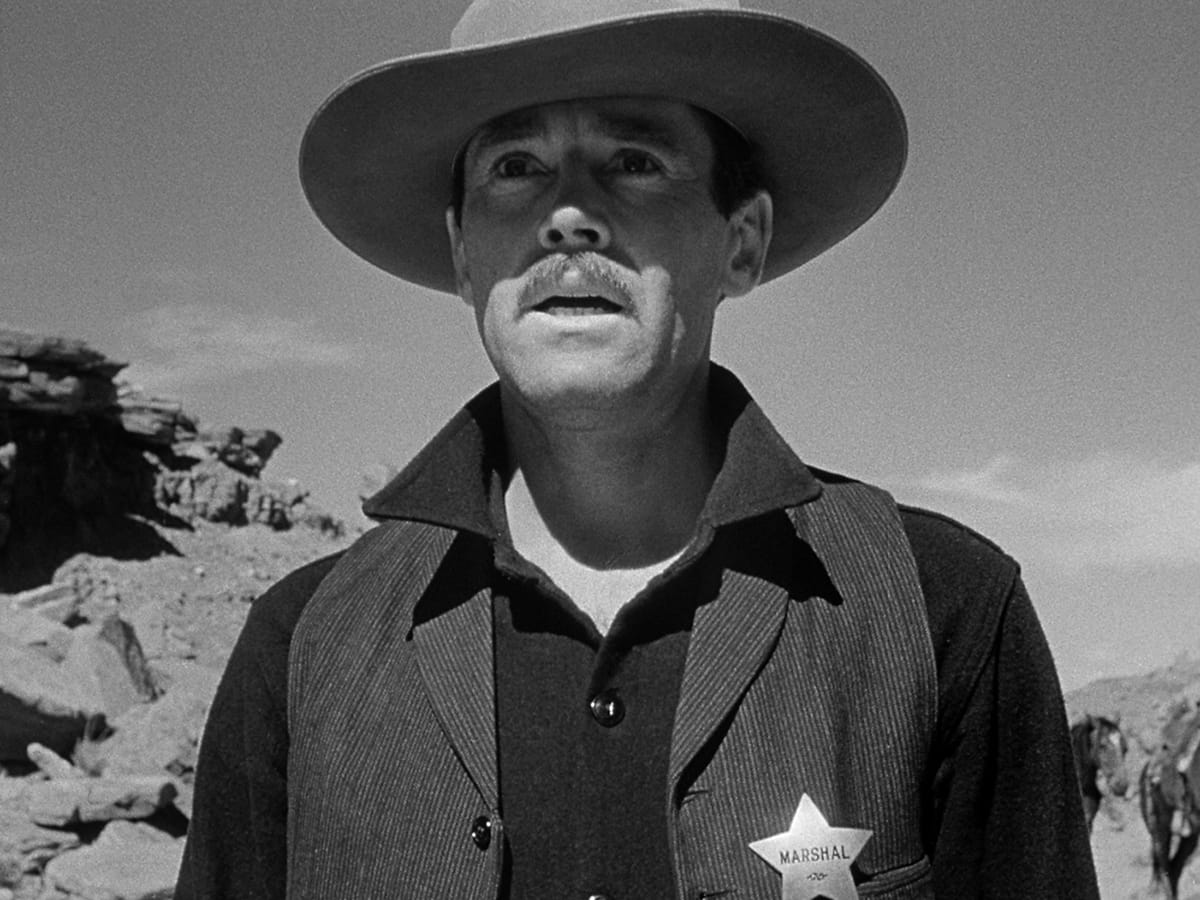 It’s a swell movie, but I don’t see myself coming back to it any time soon