The Killers is based on a Hemingway story that I know I read in college (this was in the Hemingway class that was taught by the 69-year-old guy Phil, who became my friend, and who told me some haunting details over coffee one day about the time he discovered his first wife’s dissociative identity disorder), and I know that it was one of the stories that stayed with me, and that it generated some animated discussion in class, but I don’t remember any of the details except it took place on a train platform (I think) – and that’s fine, fuck it, cuz To Have and Have Not (also based on a Hemingway novel that I’d read and mostly forgotten) is a fucking incredible movie, one of my favorites from the List so far – but I know that, had I remembered the book a little more vividly, I would have been caught up, for most of the movie’s runtime, in critiquing its loyalty to the text. Because Hemingway’s work, with its short sentences and visual style and action beats, is always said to be really cinematic and yet, like with Kurt Vonnegut and Philip Roth, his stuff just doesn’t seem to translate to the screen very well. (But I feel like it’s usually probably a testament to the writer’s mastery of his medium that the book he wrote, the book that felt so gripping and hypnotic on the page, is translated into a loyal dud on the screen. This, as I’ve mentioned a couple times now, is why Hitchcock finally gave up on trying to adapt Crime and Punishment. He said a masterpiece is a work of art that utilizes the tools of its medium to perfection. The tools of a novel are different from the tools of a film, and a masterpiece of one form will not necessarily translate to a masterpiece of the other.) 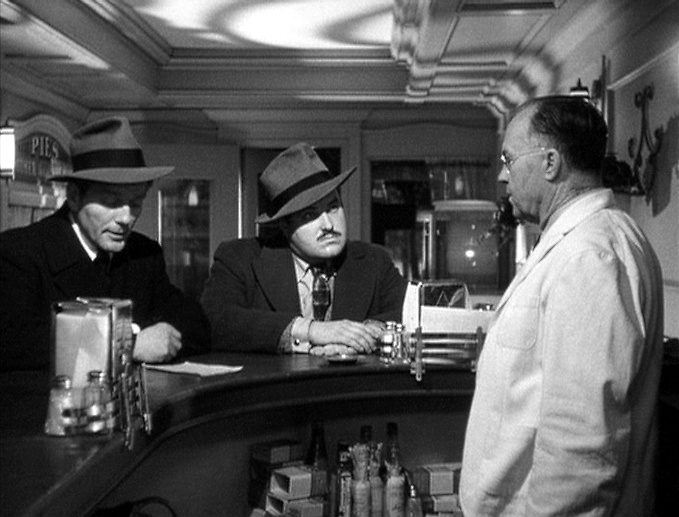 Anyway, yeah, one of the reasons I was especially grateful to’ve shown up with virtually zero memory of the story on which The Killers is based is because the opening scene, where two conspicuous mobsters walk slowly into a diner at night and act mysterious at first, and then rude and then threatening (it’s a wonderful homage to the opening of Little Caesar), made for one of the most dazzling pieces of suspense I might have ever seen in my life. That slow-mounting dread was absolutely fucking incredible – and I’m gonna belabor this point because, like with the beauty of Mildred Pierce or the devastating sadness of Stella Dallas or the heartfelt whimsy of Captains Courageous and Mutiny on the Bounty, this opening diner scene in The Killers casts one of those rare cinematic spells that reminds me, in the clearest way, why movies are magical, divinely touched, and why storytelling itself isn’t just a great thing in life but one of the major reasons for life.

I’m over the fucking moon about it.

But after that the movie kinda fell astray of what looked like a clean trip toward film noir greatness. I mean, that scene alone certainly warrants watching the whole movie, and the movie itself is nothing to thumb your nose at, but it doesn’t sustain that pitch of dread and suspense very long (but, realistically, how could it?). [Editor’s Note from the Future: Sweet Jesus, just you wait, there’s a movie in the 1950s that’s so goddamn suspenseful it literally almost hurts to watch.]

The reason these two gangsters are popping in on the diner that night is cuz there’s a regular, a former boxer, who comes in at the same time each day and they’re looking to kill him. The dude doesn’t show, so they’ve gotta track him down, and when they finally kill him just a few minutes farther into the movie there’s this feeling of disorientation like with Psycho, which boasted on all its posters that Janet Leigh was the star of the flick and then, after some masterful character development that endears us to her in the first act, subjects her to a horrific death in the first act.

Edmond O’Brien plays an insurance man who’s tasked with piecing together the details of this murder so’s to pay off the victim’s life insurance policy. So begins the tapestry of interviews (reminiscent of the device that carries Citizen Kane through different decades and perspectives) that reveal how the Swede, played by a tough, roguish, handsome Burt Lancaster, was a great athlete who became a crook, how he ran afoul of some dangerous people, and how he fell for the femme fatale played here by Ava Gardner – Gardner being a newcomer to the List whom I’ve been eager to see after learning, from James Kaplan’s biography of Frank Sinatra, that the Chairman attempted suicide on a couple different occasions after she left him.

I don’t wanna say that the movie’s mediocre. It isn’t. But that terrific opening sets us up for a hard fall when the rest of the thing is just good. The ending is pretty great, a small shootout in a restaurant, and Edmond O’Brien as a savvy and dutiful insurance man is charmingly reminiscent of Edward G. Robinson’s turn at the same sorta character in Double Indemnity. But otherwise…meh.