I’m a fucking idiot: I thought this was directed by Billy Wilder and wrote a whole long thing about how it both fits with and departs from his other work (Double Indemnity, Lost Weekend). Now I’m looking at the movie’s info online again and I see that it wasn’t Billy Wilder who directed this. it was William Wyler (Dodsworth, Jezebel, Wuthering Heights, Mrs. Miniver). This is like the frustration I kept having int he ’30s when talking about the Howards Hawks and Hughes.

Anyway. Here’s the other salvageable bit.

The Best Years of Our Lives is a gorgeous, moving, totally engrossing movie that’s both big as shit, in terms of runtime and intensity and its handling of delicate subject matter, but it also feels kinda small, intimate, and while it took me two sittings to get through the whole three-hour runtime, and even though I still don’t think I’ve totally understood or appreciated it, I can say that it didn’t feel at all like a schlep, and that I’m totally aboard for running through it a second time.

Settling in for a three-hour movie, incidentally, felt like a nice big leap back into routine cuz remember that norovirus I talked about in Brief Encounter and Battle of San Pietro? Well Id’ just gotten over it when I sat down to watch this. Here’s the scene: it’s like December 28th, I’m eating full meals again (slowly!) and moving on now from drinking just little sips of ice water and Gatorade to finally putting down some coffee. Some energy drinks. And seeing as it’d been about four days without caffeine, it was like I’d lost all tolerance for it. My receptors were fresh and clean and ready.

After testing the gastric waters with a light breakfast at home, then sitting around cautiously for a couple hours with no bad outcome, I took my laptop to Starbucks and got to work on the essay for Adventures of Robin Hood, sparked into speedy productivity by a single shot of espresso, and then when that was done I went back to the counter and got a large strawberry refresher — which looks like a big fruity sugar drink, and it totally is, but it’s also jacked with caffeine. So I got that and gulped it down and felt like I’d grown another pair of eyes when I finally put the movie on. Felt like I was watching it with more intensity than I’d watched anything else on the List — even though, obviously, I’m just sitting there with my eyes a little wider and my legs jiggling faster.

The movies’a bout three guys who come back from the war (Harold Russell, Dana Andrews, Frederic March) all fucked up in different ways; the latter two are plagued by emotional trauma, and their arcs make for a study of how soldiers with PTSD acclimate back into civilian life: the indignity of getting back into a low-paying job, the struggle to understand a laxity of youth culture’s mores, the back-riding monkey of alcoholism. The need for each other. The need for patience from everybody around them.

It’s Russell, however, who comes back with the physical trauma. He’s lost both hands in battle. They’ve been replaced by hooks — hooks with which he’s remarkably dextrous and, for the most part, contented. What gets to him is the way his family and neighbors treat him so differently. How they look at him with pity. Engaged to the love of his life, Russell starts to wonder if it might not be a greater gesture of love to break things off, and spare her a life of worry and marital servility.

I was wondering all through the movie if this actor actually has no hands or if he’d just gone all-in on mastering the prosthetics — turns out he really doesn’t have any hands, which adds a whole complex and immersive layer to the movie, but so does the fact that, as a three-hour flick that isn’t just taking PTSD but actually devoting itself to the topic, The Best Years of Our Lives feels like a curtain being drawn over the proscenium of wartime cinema. Feels like it’s an official induction to the post-war landscape — one that will still be obsessed with the war, and exploring the pertinent themes, but will probably also mostly revolve around processing the trauma.

As with Phantom Carriage and Lost Weekend I do feel like I can relate to the drinking problem on display here, and given my ostensibly complete but potentially ongoing breakup with Rosie I feel I can relate to the romantic issues faced by Dana Andrews’ character, whose girlfriend wants a more active and exciting life than he cares to provide (OK maybe I can relate to it a lot). Andrews ends up falling slowly in love with his friend/superior’s adult daughter, played here by a Teresa Wright who, just a couple years after her girlish turn in Shadow of a Doubt, comes across as an adult (which might be a bit of a hindrance, actually, since she’s playing a very similar character).

Where the movie also rings my bell is its depiction of male friendship — which, as I think I’ve mentioned in the past, is seldom communicated with emotional heft. One of the ways I was comparing this to Double Indemnity, back when I thought that Billy Wilder was the director of both, was in the way that it takes those male relationships seriously and doesn’t shy away from the idea that, apart from just loving each other, these men need one another. It’s the kind of idea that’s illustrated with zero inhibition in stories about women, but the depths of male friendship in lotsa films seem to be communicated through steely glares and wry smiles, curt nods. 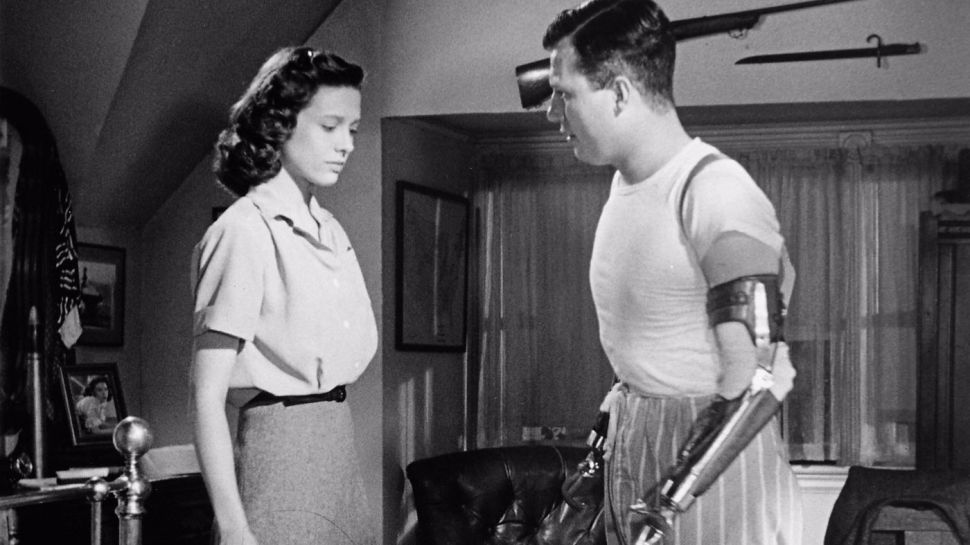 Going back to that thing about this inducting us into the world of postwar cinema: it’s also sparking my interest for what movies of the 1950s will look and feel like. It’s a decade I’ve been kinda dreading, because it doesn’t have a major event like the Great Depression or the War around which everything revolves, but I’ve also been really interested to see how the worms and demons in the American psyche will come to the surface in a decade that’s known for its placidity and materialism and propriety.