As a fan of Thomas Pynchon and Paul Thomas Anderson I got excited a couple years ago when the latter adapted Inherent Vice (a novel by the former) into a “major motion picture” starring Joaquin Phoenix and Reese Witherspoon and Josh Brolin. Great director, great cast, great source material. A sure bet.

Then I went and saw it and wasn’t sure how I felt — largely because, having not seen much film noir before this, I didn’t realize that the plot is always secondary to the mood of the thing, and so I let myself get stressed out over trying to make sense of who’s who and why they’re doing what. I figured the story was so sprawling I oughta see it a second time to make sure I knew what was happening.

Anderson’s a great filmmaker and Pynchon’s a great writer but, as Alfred Hitchcock told Francois Truffaut on the subject of why he never ended up making his long-promised Crime and Punishment adaptation, a masterpiece of one medium doesn’t necessarily translate into a masterpiece of another.

But the second viewing did help. I got a better idea of what was going on. The first viewing had gotten me well-enough acquainted with the material that, taking a broader approach with this second attempt, I caught more of the humor and stylistic stuff: atmosphere, flourishes from the actors, camera movements and the (grievous) lack thereof.

Still didn’t know if I liked it, though, so when it came out on DVD a couple months later I picked it up from RedBox, watched the whole thing again at home, and I still couldn’t decide if I liked it.

Then I saw it a fourth time about a year ago, because Pavel (who recently rhapsodized about Anderson’s latest movie, Phantom Thread, and its relation to Hitchcock’s Rebecca) was reading the novel it’s based on and we wanted to record a podcast about the adaptation. So now, a few years removed from the first three screenings, I’m suddenly very sure that I don’t like the movie. It’s artful, and it’s clearly interested in honoring the mood of the book, but it doesn’t stand on its own legs.

As a novel translated loyally to the screen, it succeeds. Cinematically, it fails. 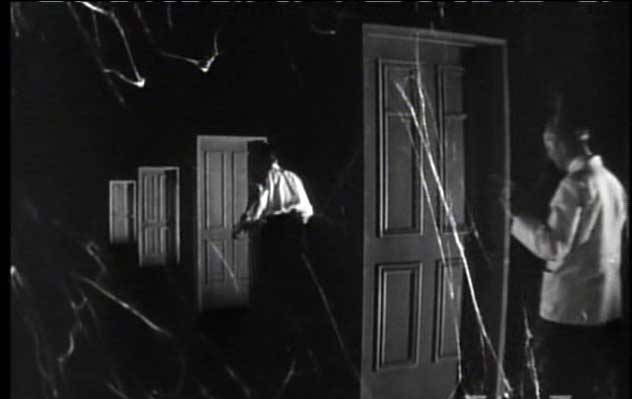 The endless hall of doors is a great visual in Murder, My Sweet and also seems like a metaphor for this story and the stories of film noir in general: complex beyond reason, one door leading perpetually to another, the films are defined, ultimately, by the mood and the look. The stories, so convoluted and carefully-constructed, are ultimately secondary.

Murder, My Sweet is an incredible noir that should be more of a household title than The Maltese Falcon or The Big Sleep — both of which are decent movies that, taken together, are bolstered by the mythos of their star, Humphrey Bogart, and also for being early practitioners of the genre’s staples — a squiggly plot that might or might not add up, a femme fatale, betrayals and brooding romances and latenight pistol shots and one-liners that make more sense to the ear than the mind — Murder is ultimately a story devoted to entertaining the audience. We see that motive in the pacing, the action, and the uncharacteristically happy ending. I can see how it might seem like less of a work of “art” on account of its concern for the viewer, but I think the simple fact that it’s more watchable, that it’s funnier and more exciting, makes it a better movie.

It’s a strange phenomenon but it does make sense that late-stage and modern film noir, crafted after the genre had taken its own natural shape and when filmmakers are consciously using the tropes rather than inadvertently perpetuating them, seem more genuine than those early stories — which I guess gives way to an argument about whether those later projects are imitations or just more refined.

And while the plot can get confusing at times, it’s more foggy than it is opaque, and things move along at such a clip and our hero is so endearing that the viewer relaxes (I think) and maybe surrenders to just seeing how things unfold. (It’s also surprising to find that Dick Powell, the jubilant tap-dancing charmer of 42nd Street, Footlight Parade, and Gold Diggers of 1933, is so persuasive and compelling as the bored, scrupulous, dutiful Philip Marlow — later embodied, and made famous by, Humphrey Bogart in The Big Sleep. Not sure about this yet, cuz I only saw Sleep once, a few years ago, but I wanna say Powell does a better job.)

Apart from the fact that this is a lesser-known noir that perfectly handles the conventions and devices of its genre, and that it thereby stands in stark contrast to somebody like Paul Thomas Anderson’s homage-minded handling of those same devices, the experience of watching Murder, My Sweet seemed to echo Inherent Vice because the latter has a section in the third act where its hero, Doc Sportello, is drugged and held prisoner in a room that resembles the one to which a similarly drugged-up Marlowe, in Murder, is confined, made desperate, and promtped toward similarly violent means of escape. (I’m still not toally decided on how to handle spoilers in this Project, so I won’t go into much detail about those escape sections, cuz they’re both exciting). It almost makes me wanna go back to Inherent Vice, now that I’ve seen more of noir’s defining chapters, to see the constellation of Anderson’s inspirations.

Marlowe, in Murder, is hired to accompany a guy to a ransom drop-off. It’s an uncharacteristic gig for Marlowe, to be operating as a security guard rather than a private dick, but the money is good so he goes for it. The guy ends up getting killed, and Marlowe’s knocked unconscious, and it sets the stage for a story of missing jewels that would appear, initially, to have nothing to do with that ransom drop in the beginning but, of course, ties right back to it.

I was so dazzled while watching it but I think the delight had a lot to do with the context of comparing it to INherent Vice and, bit by bit, exploring the sub-genre to which it belongs. I’ll go ahead and recommend it to somebody trying to explore the genre themselves, cuz it’s not that long and definitely one of the stronger and more enjoyable examples of noir to appear on the List so far, but I’m thinking that noir is the kinda sub-genre where a person could blanketly say they’re just not a fan and don’t wanna give it the time of day. The look and mood of em, the story types, the typecasting of genders and such.

So if you know that you like noir, or you wanna explore it, this is a definite recommendation.