Double Indemnity, a landmark of noir and the final straw in establishing Barbara Stanwyck as my favorite actress from the List up to now, might also, I was thinking, be an early post-war film – even though World War 2 was still going on.

The staples of noir – a deadly courtship, a seemingly simple sordid affair that proves way more sinister and complex than it first appears, and a hard-earned melancholy or nihilism in the hero – seem better-crafted here than in earlier genre examples from the List, either Maltese Falcon or Laura, both of which were themselves, incidentally, made after the war’d been set in motion. Those two earlier examples, in retrospect, feel as though their characteristics were only beginning to take shape. The nihilism of those two movies is thinner than this sort.

Also, unlike those two, the plot of Double Indemnity is straightforward from the start, moves forward with quick and graceful clarity, the relationships among out characters evolving, the stakes mounting. It’s a masterpiece. I love it.

Barbara Stanwyck plays Phyllis Dietrichson, the wife of a man who once had money, and Fred MacMurray is Walter Neff, the insurance salesman she reels into a plot to first get her husband’s signature on a life insurance policy, then kill him, and finally run off together with the payout. Walter is a typical noir hero, narrating the movie from its bullet-doomed conclusion, but in his lechery toward Phyllis he comes across as the most odious fuckboi, fedora and all, calling her “baby” off the bat and taking her rejection with a cocky swagger back to Insurance HQ. (It reminds me of the restaurant where I worked last year. Some busser would move in on a woman, lean an elbow on the edge of the booth or bar like he was hot shit, try out some smooth talk, and then when he got rejected for saying something inappropriate, or being a douchebag, he’d scoff and turn to the nearest employee, his nearest teammate, and shake his head like he didn’t care at all. “Bitch ain’t shit,” he’d say, tucking the dishrag back into his apron before heaving a bin full of dirty dishes onto his shoulder and strutting back toward the kitchen.)

His boss here is an upstanding guy named Barton Keyes, played by an affable, avuncular, scrupulous Edward G. Robinson, whose performance here is, I think, as memorable as his turn in Little Caesar. Like the hero of that movie, Rico Bandello, Barton here is a professional, cold in his business doings, but not heartless. When he’s beat at something, he acknowledges defeat without compunction, and when he knows he’s right he won’t stop until he’s proven the enemy wrong. Another parallel between Barton and Rico is that the sentiment they do allow to cross the threshold of work – a mentor/protégé fondness for one another – proves to be something of an undoing.

And here’s a montage 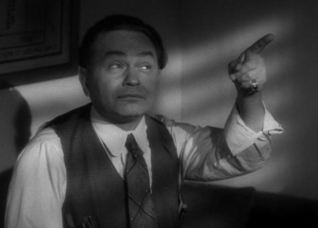 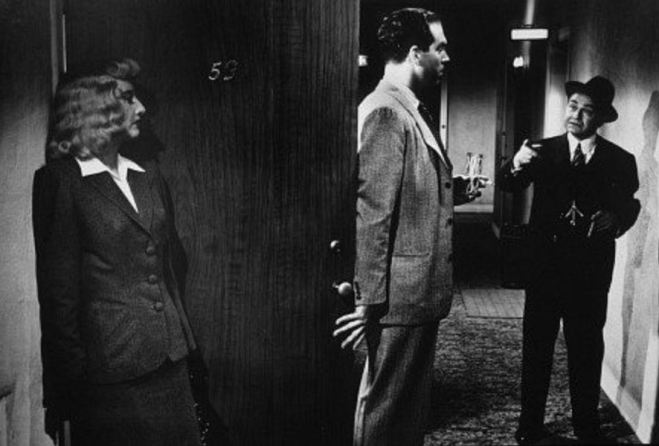 …or just making a point.

When sentiment prevents Rico from shooting his old friend, Joe (Douglas Fairbanks Jr), that old friend goes to the cops, and Rico has to go into hiding.

Here, when Barton starts looking closer into the case of the “accidental death” on which Phyllis is trying to collect her claim, his trust in Walter, their mutual affection, is the only thing that keeps him from discovering the truth. Walter points that out to him in the end. Says, “You couldn’t figure this one…because the guy you were looking for was too close. Right across the desk from you.”

And Keyse, with unblinking solemnity: “Closer than that, Walter.”

This piece by Paul Howlett at The Guardian ends by focusing on that final exchange and uses it to highlight something I hadn’t paid much mind to: the father-son relationship between Walter and Barton. Which is exactly the kinda thing that gets me unbearably sentimental. I actually felt that swell in my throat just typing Keys’s line up above.

“Closer than that, Walter.”

This is the second time I’ve seen this movie, incidentally. Didn’t recognize the title or poster until it was well underway. Back in my sophomore year of college, while in a long-distance relationship, my girlfriend came down from Gainesville to visit me in Miami and, taking a film class that, while demanding, was way more manageable than all the other stuff on her plate that semester, she’d procrastinated on watching some four or five movies. So we watched this one and Meshes of the Afternoon and Brother from Another Planet and something else. Something German, I think. Maybe I’ll come across that one on the List and remember.

My sophomore year in college was also the first year I got access to Netflix’s streaming service, which I think cost something extra and had also been difficult to run on my laptop in those first couple years that it was functioning, and I remember sitting at my desk in my dormroom, Christmas lights taped up on the wall behind me and a cheap rocking chair in the corner that I bought for $75 off a woman whose son had just turned three and was too heavy to rock anymore, and I was sitting there reading some of the preliminary news about who was being cast as Catwoman in The Dark Knight Rises before heading out to Taco Bell, grabbing a $5 Gordita Box, and coming back to watch Howard Hawks’s Scarface streaming on Netflix. I’d tried watching it in high school, sitting in my brother’s bed on a rainy day (where, in one gag-inducing mishap, I nearly mistook my ice-less cup of Coke for a cup full of his tobacco spit), but I fell asleep. This time I made it all the way through, finally, but not without lots of pauses to look down and text my girlfriend, or check my email, or post something on Facebook. My attention span was a little more accommodating than it’d been a few years earlier, but I still wans’t quite the match for an 80-year-old movie.

So when my girlfriend came by a few weeks later with Double Indemnity I remember being surprised by how engaging it was. Maybe it’s cuz I was watching the movie with a friend beside me and we were trading remarks throughout. But maybe it’s cuz Double Indemnity is that good, that accessible.

Blue Velvet! That was the other one. And I remember looking over at her during one of the tender sex scenes, which I think comes right on the heels of a scene of sexual violence, and voicing my discomfort at being turned on.

Anyway. Apart from Double Indemnity being a masterpiece of its genre, of its medium, I’ll tentatively say that this, like Night at the Opera and To Have and Have Not, is the kinda movie you should pick up if you’re intimidated by black-and-white cinema but also wanna get into old movies.