This post is a rarity in that I’m writing it on the same day that I’m putting it up on the site, which means I’ll be bouncing back to check in on it and change things over the next couple weeks, and the fact that it’s being written on the fly is good enough occasion to talk about this assignment my mom gave me yesterday. She asked me to write something brief. I don’t wanna get into it. But she was willing to pay me and the assignment really was brief – but also super vague. It was a sprawling topic and so it seemed ridiculous to say that I couldn’t just jot two paragraphs, since I’ve basically done nothing but write and watch movies for the past couple years, but it was like what David Foster Wallace talks about, in identifying the difference between writing fiction and writing fiction, where he says that writing fiction is an endless abyss because there’s nothing there, you have to invent everything from scratch, whereas nonfiction is a different kind of abyss because it entails absolutely everything. He mentioned in a radio interview with Michael Silverblatt that, if you really wanted to, you could spend two hours describing the inside of an undecorated room. So I think I was paralyzed by that disconnect: the smallness of the task and the enormity of the task.

I wrote one of the two paragraphs she wanted and then backed out, apologizing, which I felt bad about, and I think she might be kinda disappointed, but I was working up a sweat while doing research. Kept starting a paragraph and then deleting it. Wondering if I should spend more time drafting a recusal or just keep banging my head against the assignment.

A big part of it that too is that writing is pretty much the only thing I do well and so to have my mom ask me to help her out with that one thing and to suddenly find I can’t get my thoughts together is kind of…frustrating.

And there’s something akin to that in The Palm Beach Story – which kinda confused me, and I’m surprised to find that it’s one of the movies on the List (like a lot of subtle stuff from the silent era) where I’m having to resort to Wikipedia and TCM for a breakdown of the story. But yeah: this is another of Preston Sturges’s great romantic comedies from the early ‘40s and, like the last one on the List (Sullivan’s Travels), stars Joel McCrea. Dashing, pouty, fussy, proud – in Between Flops, the Sturges biography I’ve been consulting, there’s an anecdote about Sturges telling McCrea, when he’d finished the script for Sullivan’s Travels, “I wrote a part just for you.” 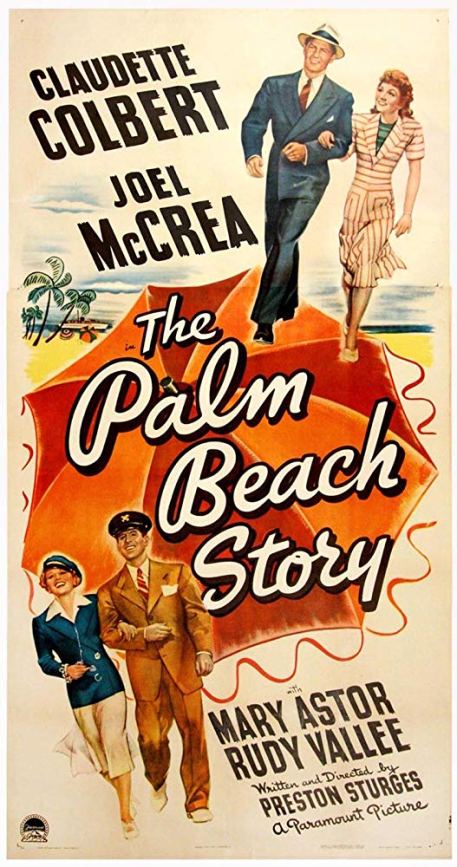 McCrea was incredulous. Said, “Nobody writes a part for me. They write a part for Gary Cooper, and when they can’t get him they come to me.”

And yeah, he is kinda like a poor man’s Gary Cooper; and, just as I don’t like Cooper all that much, McCrea kinda rubs me the wrong way too.

In Palm Beach Story he plays an architect, Tom, who’s broke but has really big ideas and someday, if those ideas pan out, he’ll be rich. (I know we’re only in 1942, but this feels like a 1930s premise. Some Great Depression vibes lingering here. Steve Donoghue laughed when I suggested that the Depression was “over” in 1941, once we got involved in the War, but the ethos in Hollywood movies does appear to have shifted. It wasn’t so much about a lone man getting his life back together, or earning his way to the top.) His wife Gerry, played by Claudette Colbert, feels she’s holding him back. She’s concerned about whether he’s really going as far as he can so long as she’s in his life…but she’d also like to live a lavish life. She wants to be doted on. Wants people to buy her things.

They end up separating, with Gerry pursuing people who will provide that kind of attention. First she rides along in a train car full of hunting enthusiasts (we’re treated to a long slapstick routine involving the misuse of hunting rifles – much like the slapstick bus chase in the first act of Sullivan’s Travels) and then finds herself in the embrace of a gazillionaire, the friendly and generous and punctilious J.D. Hackensacker III (Rudy Vallee), who dotes on Gerry as she dreamed: drives her around on his boat, and then in his fancy car, buying her everything she wants and then insisting on buying her more. The finest of everything.

Sturges had some trouble with the censors on this one because there was so much sexually suggestive dialogue. He had to go to town on it in editing. So while there’s no overt mention to her fucking this Hackensacker dude, there’s still a cuckolding vibe that makes the romance aspect kind of unease. Tom is following her around as she cavorts with Hackensacker and she’s telling him to play it cool because, once she’s totally earned this guy’s love and trust, she’ll be able to finance Tom’s creative goals.

It reminds me of The Awful Truth, actually, the romantic comedy that blew Cary Grant into stardom. That one’s about a couple who are clearly made for each other but who – both being too proud to back down from a fight – separate. Given split custody of their dog (who I think was the same dog as in The Thin Man), Grant is allowed to pop in on his ex and watch/ridicule her courtship and dalliance with an aloof Ralph Bellamy (whose plays the same romantic heel, vying for the love of a woman who’s mistreated by Cary Grant, in His Girl Friday). It’s clear from the first scene that we’ll be treated to a happy ending but, nonetheless, it’s kinda torturous to watch these two magnetically attracted people be held at such a tenuous remove from one another before we allow nature to slap them back together.

The Palm Beach Story is a good movie that I’ve got some reservations about. I’m sold on Sturges’s comedies mainly because I loved the message in Sullivan’s Travels, and because I so loved The Lady Eve, but I’m not sure if I really dig his style, or his sensibility. I’d like at some point to marathon all of his seven great pictures from ’39-’44, but for now I’m inclined to say that my reaction to his work averages out to just liking him. Think I prefer Ernst Lubitsch.