it’s come up a lot in the Project at this point, the fact that I don’t really enjoy animated movies for kids, and I cringe at bringing it up because it sounds kinda pretentious but I also wanna confront it because, as Thousand Movie Project has repeatedly demonstrated about every genre bias I have: you can’t group everything together. Every genre has stereotypes, and every genre has exceptions. It’s naive to say you just hate a whole genre. So here’s my thing: I’ve got this disposition where it’s like if you’re gonna show me a movie, a two-hour piece of art, that doesn’t shine a really incisive light on what it’s like to be alive, or that doesn’t illustrate some grave injustice, or excite me with some really complicated story or some beautiful feat of photography, set design, acting or action or dancing or whatever, it’s like I want nothing to do with it. Don’t know why. But the idea of sitting down with something that’s just pure fun doesn’t…seem fun to me — which I know is gonna change with time. Everybody tells me. Says that eventually my life’ll’ve accrued so much loss and failure and doubt and stress that I’ll be begging strangers to tell me jokes and complaining to the manager when the cashier doesn’t smile. (As for the whole disinterest in animated features especially: I just don’t seem to have an eye for appreciating the art. With Walt Disney it’s changing — you can catch that in the essays about Snow White or Fantasia or Pinocchio — because, having read Neal Gabler’s biography of him and the story of the studio, I appreciate these Disney animated movies within the context of their being the final product of so much human labor. They don’t really stand on their own in my mind.)

And I do know for a fact that I’ll eventually go that route because, much as I bitch and moan about the tedium or pointlessness of levity, I do sit down to watch Bob’s Burgers or South Park or A Night at the Opera or Arthur or Love and Death on a pretty regular basis, and I get really into them, and when at the end of those runtimes I haven’t been emotionally gutted or prompted toward some philosophical breakthrough, I don’t feel like it was a waste of time. 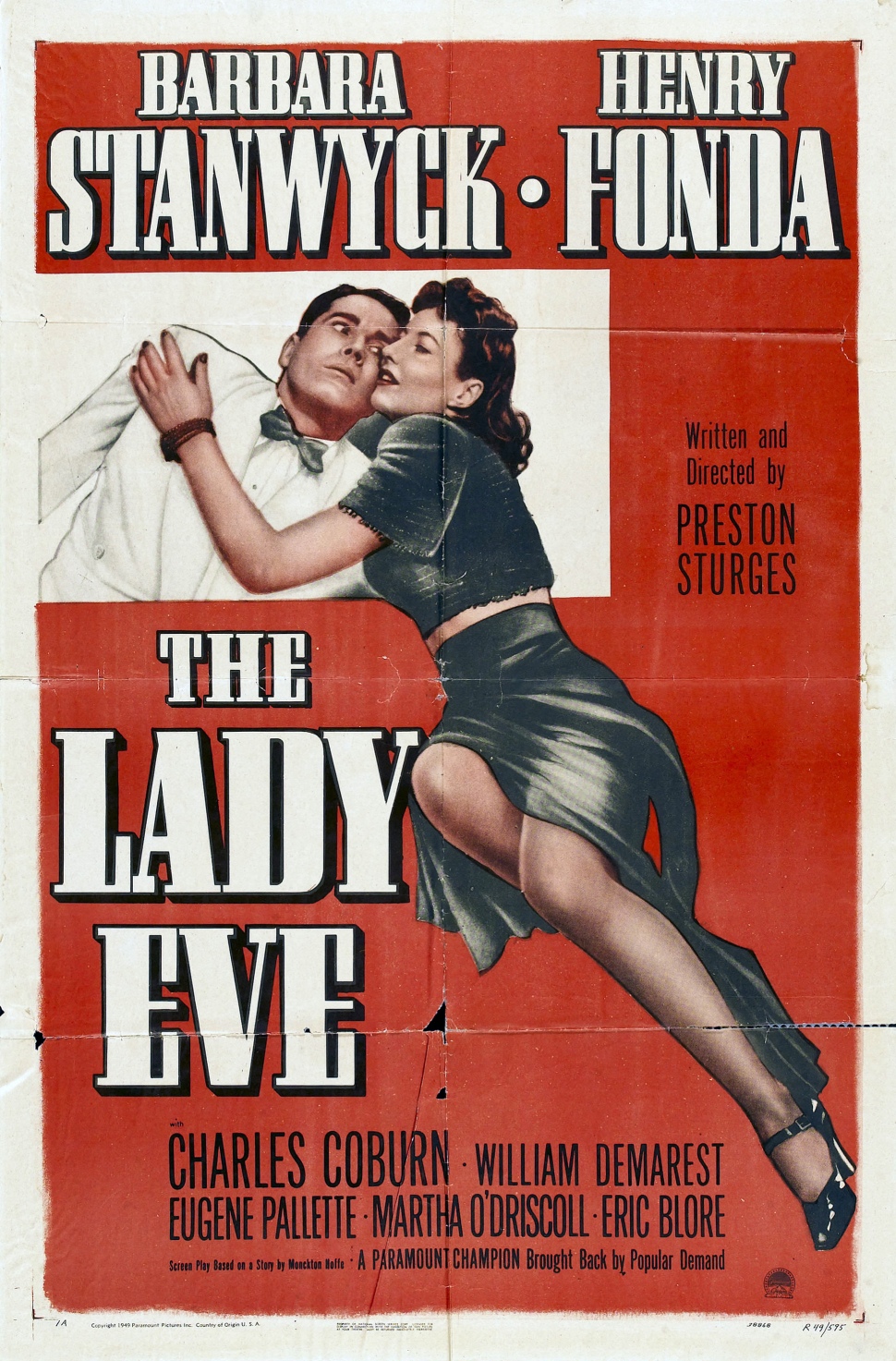 The Lady Eve isn’t trying to be ball-bustingly hilarious, I don’t think, nor is it pretending to be the least bit dour or philosophical or whatever — it is, however, a romantic comedy, and the stars — Barbara Stanwyck and Henry Fonda (about whose charm I rhapsodized in reference to John Ford’s Grapes of Wrath) — are beautiful young famous people who’re delightful to look at and brimming with charm. And there’ve been a lot of romantic comedies on the List so far and so I sat down to this feeling kinda worn out by them, and then I kinda kept checking my phone through the first fifteen minutes or so, but, predictably, ended up loving it. Not just liking it. Like it might be one of my favorite rom-coms from the List. Something I’ll be recommending to people forever. And I don’t love it because of the visual beauty, necessarily, or because the jokes are so outlandishly clever or the acting’s to die for or the language is on point — I love it because the stakes feel low and the romance is tender and the stars’ve got such a lovely dynamic that i just smiled the whole time.

Just stared at the screen and fell in love.

I also kinda got the sweats about Barbara Stanwyck’s legs — which I’d be quick to confess if this was a usual thing, but it’s not, and nor do I think it was really just her legs that was getting to me but maybe just her vibe, y’know? Cuz even though she tends to play pretty hapless characters there’s something masterful about it where, as a viewer, there’s this interesting dual reaction of believing in that haplessness, that vulnerability, while at the same time noticing the authority behind its execution. That complicated response is probably what accounts for the strangely fervent attraction I’m feeling here. Also: this is Stanwyck’s first role on the List in which she’s clearly sexualized, so maybe it’s opening the gates to some feelings I didn’t know were there. She played more conservative characters in The Bitter Tea of General Yen and Stella Dallas.

Quick summary of the movie: Henry Fonda plays Charles, a snake expert (ophidiology is what that field’s apparently called) who’s also the very rich heir to a line of beer, hops onto a boat, on his way back from an expedition, where he meets Jean (Stanwyck) and her father — both of whom are card sharps (it was only in checking the Wikipedia entry that I realized they’re not called “card sharks”). They start hustling Charles in some card games until Jean starts falling for him, and has to step in so that her dad doesn’t totally exploit the guy. So Jean and Charlie fall for each other, naturally, but their fondness for one another is one of the few relationships in a romcom from the era where it seems way more like lust than love. There’s this really tender scene in Jean’s room where she’s laying with Charlie and just stroking his hair while they gaze off into the same distance and talk in a dazed and tipsy way.

Eventually they’re separated — but we don’t get the usual rom-com spell of thinking that all is lost. They cross paths again shortly thereafter, Charlie stumbling upon Jean in the midst of some spectacular hustle. It’s cool. Very much a movie by Preston Sturges — on whose career and sensibility I’ll elaborate in a couple days, when we get to Sullivan’s Travels, which is far from being my favorite title on the List but definitely rang an important bell for me.

Anyhow — the movie is conventional, in its ways, but it bears the cynical “we’re here to have fun” mark of director Preston Sturges, which, like Ernst Lubitsch, feels a bit subversive. We find at the end of the movie that both Jean and Charlie are married to other people, and that it isn’t gonna stop them from consummating their relationship.

Good stuff, my dudes. Good stuff. Check it out.

Help keep Thousand Movie Project running with a donation to the PayPal or Venmo! Just search for ThousandMovieProject on either one and you’ll find it!