Steve Donoghue takes me to task for referring to Disney’s animated features as “kids’ movies,” which I guess might suggest that they aren’t to be enjoyed by adults, or that the adults who do enjoy them are somehow defective or regressed. The reason I give them that label is because their goal isn’t just to delight their audience but also to moralize and inspire, usually without ever tipping an audience’s sense of danger or doom too far toward the dark, which I guess as an angsty twentysomething strikes me as false, or at least kind of uninteresting, and so i tend to put them off, or to sit down with a bias toward hating them. Maybe cuz I’m looking for stuff that’s just gonna gimme an outlet for my kinda-silly angst? Ahdunno. It’s petty, but it’s there.

With Pinocchio, though, it’s different. For one thing, I loved it as a kid, watched it constantly and delighted in my mom’s nicknaming me Jiminy Cricket, and so, having not watched a single scene of it in maybe fifteen years or more, I got to enjoy this weird experience of not quite knowing what was coming next (that fucking donkey transformation scene was surely one of em) but, at the same time, feeling this deep, emotional, vivid familiarity with each scene as it unfolded. Adding to that, I’m presently halfway through Neil Gabler’s huge biography of Walt Disney, which has made me way more appreciative of the animation, which does seem a little antiquated here but also (since I now have an idea of how hard those animators worked) really impressive — and I’m more appreciative, too, of just everything Walt and his studio were trying to accomplish at this point. 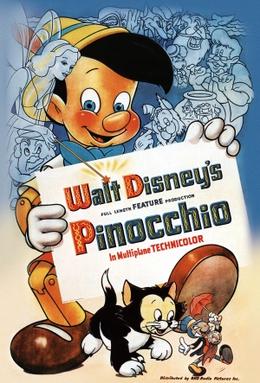 What also made the movie really pleasant is that a reader of the website got it for me! I couldn’t quite afford the DVD when it came time for me to watch this movie and, since Disney doesn’t allow a lot of its stuff to be rented online, the only way to watch Pinocchio would’ve been to buy the digital version for $15. So I went to Thousand Movie Project’s Facebook page, asked if anybody was willing to send me an old DVD or VHS copy and, amazingly, somebody came through! Corey sent me a message with the digital code he got off of his DVD purchase. So I was able to watch it for free through iTunes.

So, once, again, my thanks to Corey.

It came as a surprise in Walt Disney’s biography to learn that Pinocchio was sort of a disappointment. When Walt and his animators came off of Snow White they got straight to work on Bambi. Long before, however, Walt decided that, while his team was good at pulling off gags and could maybe get their audience to shed a tear if the emotional moment was low-hanging fruit, Bambi needed to be crafted by a team with a little more experience, one that could better-manipulate the audience’s heart strings.

So he put Bambi off and switched everybody’s attention toward Pinocchio. Even this, however, fell to the side of Walt’s focus as he became consumed with “The Sorcerer’s Apprentice,” a Mickey Mouse short that would be featured in a larger project that he referred to, at the time, as The Concert Feature (which ultimately became Fantasia).

Hard to see how exactly Pinocchio falls off from the creative bar set by Snow White, and why Walt had such a problem with it. The movie’s adventurous, it’s got heart, the animation’s great and I think it’s got a more distinct and fleshed-out mood: the dark wood of the homes, the dusty floors, the moonlight and the rain and the murky depths of the whale’s belly when Pinocchio and his creator, Geppetto, get swallowed. Its darkness is cozy, intimate, and feels like an appropriate follow-up/response to the brightness of Snow White.

Maybe the story is a little more disjointed. The script for Snow White was definitely subjected to more scrutiny and tinkering and refinement than Pinocchio‘s. But if the movie’s messy, I see it as a charming messiness, a messiness befitting the kind of story that’s trying to speak to a child’s unstructured imagination.

But the fact that I’m coming to its defense when normally this is the sort of movie I’d avoid is probably a sign of my being swayed by nostalgia more than anything else.