The Bank Dick is really funny for like the first ten minutes and then just charming for its fifty-minute remainder. Amusing and clever and warm, W.C. Fields is well-settled into his avuncular charm, and his humor here is more the sort to elicit a deep smile than a chuckle. I liked it more than the previous W.C. Fields movie on the List, It’s a Gift, which was funnier than Bank Dick and showcases way more inventiveness with set pieces (stuff to maybe rival Chaplin or Keaton or Lloyd) — but that last movie was also really dark, in a strange way. It’s the standard for a W.C. Fields comedy that, like Rodney Dangerfield in decades to come, nobody respects him. Not his wife, his kids, his colleagues or customers or boss. He’s great at playing the heel. But that seemed to get a little outta hand with It’s a Gift.

But I imagine the context in which you’re watching it is also a factor in how a person responds to it. Like I can imagine watching It’s a Gift with an audience that’s cracking up all throughout. A chuckle here and a chuckle there. It gets contagious.

But it’s way different to watch some of these set pieces alone, in the dark, especially if you watch one or two of the guy’s features in a row, as I was able to do thanks to this $10 W.C. Fields box set I got online. 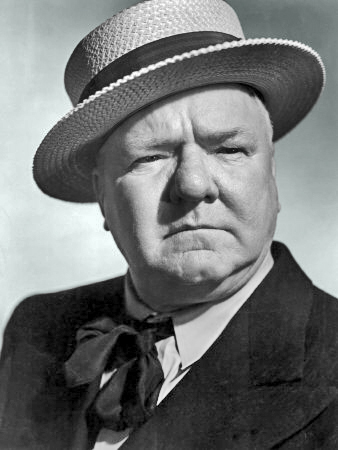 A few nights after watching The Bank Dick I re-watched It’s a Gift, and then immediately after that watched another one called You’re Telling Me! — the latter being extremely dark, obsessed with failure and suicide and only kinda thinly veiled with comedy. Watching the two movies alone, back to back, I started feeling kinda bad for him. Like, concerned for Fields’s well-being. I think if a YouTuber today were to release a similar sort of schtick, she would be inundated with mental health questions, links to suicide prevention aids, the works.

The Bank Dick, although it does still trade on that old schtick of Fields being the heel to almost everyone in his life, also has more story to it. His character of Souse (“Sou-zay!”) gets some dimension when we see him being chummy at the bar, or being respected by a filmmaker who’s come to town. It isn’t just people shitting on him from fist frame to last.

Souse is a bank guard who “borrows” cash from the bank so he can invest in a sketchy stock that he’s told is about to explode. His plan is to pay the bank back when he gets his bonus in a few days. Obviously, things don’t work out that way. The bank is set to be audited shortly after he’s taken and invested the money, and his son-in-law stands to be blamed for the missing cash. Antics ensue but, in a refreshing change of pace from some of his other movies, the antics also move our characters forward, and the story goes in some unexpected directions.

Memorable about my actual viewing of The Bank Dick is that I was able to see it with my dad. My dad [editor’s note from the future: my dad’s a fan of the Project now, but last year, when we watched this, he had some misgivings, to put it mildly] is apparently nostalgic about W.C. Fields, whose movies he and his late brother would watch together as kids, and I realized when he did his impression of Fields’s boozy drawl before we settled in to watch the DVD that (1) it’s a pretty decent impression, and (2) he’s been doing it my whole life and I never knew what it was. I do remember him using that voice years ago the first time he drove me out to meet my high school girlfriend’s parents. My girlfriend’s mom got to talking with my dad on the front lawn about what a commute she had each day and mentioned at one point that he car, still in great working condition, was a few years old, that it had over 100k miles — whereupon my dad donned this weird voice and said, “The resale value of that car is gonna be nil.” I was mortified. Thought he was mocking her.

She clearly didn’t understand why he was talking that way either and just continued with the conversation as though it hadn’t happened.

Turns out it’s a line from the fucking Bank Dick. W. C. Fields says it at the end, when he’s being forced at gunpoint to drive a getaway car that he keeps destroying by rolling it over treacherous terrain.

Anyway. Felt a sappy sorta delight to be able to watch this with pops. It’s made him excited for me to get into the 1960s so we can watch Judgment at Nuremberg together. Seems to be excited by the idea that he’ll be able to tag along for some nostalgia when he wants to.