I’m still not crazy about Cary Grant but I think he’s pretty good here, more compelling than he’s been in any other appearance on the List so far, and I’m sure his magnetism here is accomplished by the joint qualities of 1) his being allowed to tap into a new level of his natural charm and 2) the consistently remarkable direction of Howard Hawks when it comes to action and suspense. Grant also (finally) plays an adult, rigid with responsibilities, as opposed to the handsome roguish kid he plays in She Done Him Wrong and The Awful Truth (disregard the caricature of an adult he plays in Bringing Up Baby). There’s a sequence here, in the first act, where Grant’s character, Geoff Carter, has to guide a fog-blinded pilot, via radio, to a safe landing. No guns are blazing, there’s no encroaching enemy, there isn’t even a dramatic score. It’s just a tense situation, with a believable set of characters facing enormous stakes as they try to accomplish an incredibly delicate task. it’s one of the best pieces of suspense I’ve ever seen.

Only Angels Have Wings is clear and accessible — but the McGuffins are such that I’m having to consult TCM and Wikipedia to remember exactly what exactly is being transported in these planes, and why, because while we believe that all this stuff is vitally important to the characters, it doesn’t carry much weight for the viewer. And that’s fine. What the movie’s actually about is love and friendship and redemption and courage — and the pairing of a birlliant cast with a brilliant director renders it a beautiful vehicle for exploring those themes.

Still. The plot makes perfect sense as it’s unfolding but then goes foggy when you leave the theater.

Jean Arthur plays a musician, Bonnie Lee, visiting a South American town where Carter, who I guess is the head of a postal service (?), oversees the planes that carry mail in and out of town. I think there was also a mention of military work in his past. Anyway. She falls for him and even though carter plays a jaded, brokenhearted, brutish workaholic we can see him flash a few bits of affection. Or maybe he isn’t showing it and I, the sexually flustered viewer, am projecting a mutual attraction onto these two stars, to be consummated for my vicarious delight. 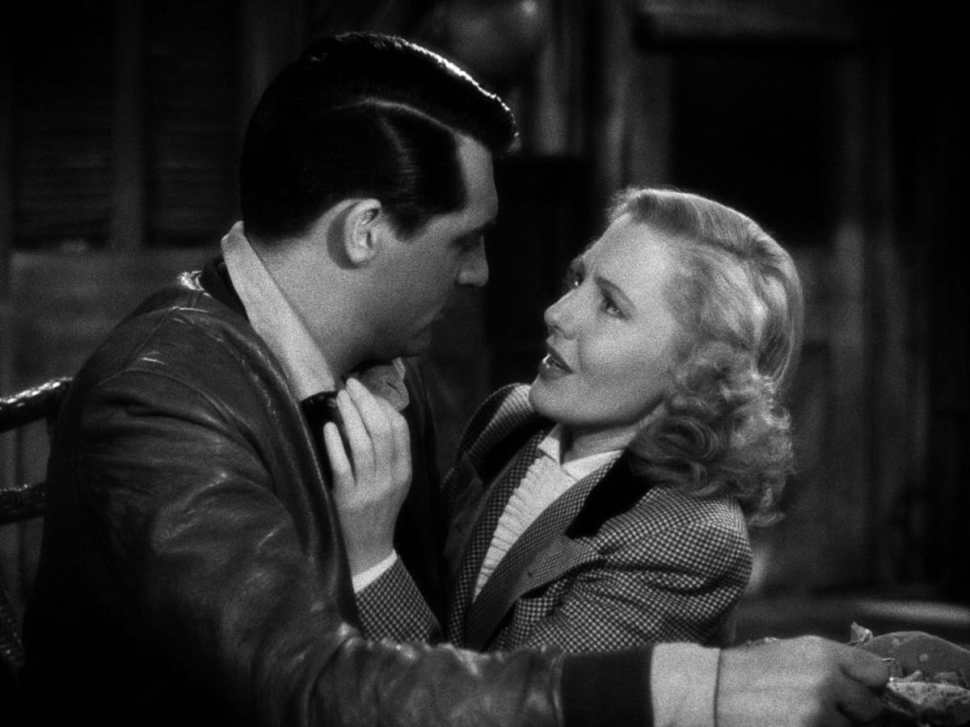 Whatever the case, it’s a great movie with a fairly large cast of distinct and interessting characters whose relation to one another is complex, layered, but well-presented, and easy to follow. I wasn’t a fan of Hawks’s previous movie on the List, Bringing Up Baby, but I was really impressed by its cleverness, the way that complexities of character and plot feed off of one another such that, complicated as the story becomes, we never lose sight of who’s who or what’s what, and it all manages to feel very simple. Only Angels Have Wings feels like a marriage of that brilliant character/story work from Bringing Up Baby and the masterful, daring, timelessly jolting action direction of Scarface, Hawks’s first feature on the List.

While it doesn’t feel all that dated in terms of story, Only Angels Have Wings does seem like the sort of movie that would never get made today. There’s a well-paced doling of action beats, there’s a dashing hero with a charming heroine, a great script with a heartening message, but the premise (some postal dudes tryna score a government contract to deliver mail?) just isn’t dramatic enough to be communicated, seductively, in a two-minute trailer.

That sounds like a curmudgeonly thing to say, like I’m disparaging modern movie or saying they’re inferior to those of the ’30s, but I don’t think one era was better than another. Maybe I will at the end of the project, when I’ve got better perspective. But this does feel in a soft way like an example of something lost. To take an ostensibly mundane premise and infuse it with enough talent that it becomes a sweeping romantic adventure, one that couldn’t be summarized in an elevator pitch.