Stella Dallas is the third movie on the List to be directed by King Vidor (following The Big Parade and The Crowd) and it’s the first of his movies to feature sound, so it affords the Traveler, somebody going through the List chronologically, an opportunity to analyze it within the context of Vidor’s earlier work, get a sense of his aesthetic, and to see if there are distincitive qualities that make for a King Vidor Movie.

Vidor does have some distinctive cards, I’ll get to em in a minute, but I wanna point out first that Stella Dallas is the first movie since The Phantom Carriage, way back in the beginning of the Project, to speak with like a painful directness about problems and hangups in my own life, open wounds, and while it was maybe kinda torturous in parts, it was also comforting. To see one’s problems blown up onto a universal canvas.

It also resembles Dodsworth pretty closely in that it’s about a youngish woman, ultimately a wife and mother, who feels stifled by her responsibilities and longs for culture, fun, the life of a socialite. But it picks up Dodsworth’s slack, in a sense, by paying fairer attention to the woman’s situation. Stella (Barbara Stanwyck) marries young and has a daughter right away, whom she adores, but she also – having married so quickly – never has a chance to grow up, to be a careless young socialite, get attention. The only glimpse we catch of Stella as a young single woman has her at home, servile in the kitchen, packing lunch for her brother, cleaning alongside her mother, living in fear of her father. From here she goes directly into the arms (the bed) of her brother’s employer. The two are quickly engaged and give birth to a child on their first wedding anniversary. The speed of it all hardly allows for a moment of reflection, growth. 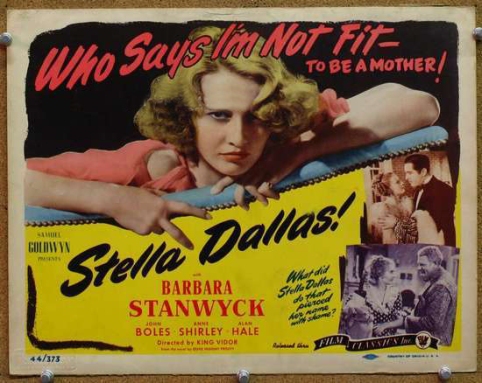 So yeah, Stella becomes immature and petulant at times, and it makes her stand in stark contrast to her husband’s well-adjusted professionalism, but what are we to expect? She never had a chance to work at a place where she was respected (as he was) and she’s never lived alone or had the freedom to pursue, independently, the socializing she’s so idealized (privileges that her husband appears to’ve been enjoying for some time).

I kinda feel like my mom never got those chances, either. When finally she was of an age where she might have pursued them, in her early twenties, she was already a devoted mom, a wife, the religiously attentive daughter-in-law to an ailing old lady.

So this all rings my bell. The way that Stella struggles to have a little fun, and then gets punished for it, and then when she tries to get settled, to be her own contented person, she’s punished again for having gotten there too late.

The ending is emotionally gutting. I won’t spoil it, because the movie’s worth watching if only for Barbara Stanwyck’s amazingly tormented performance, but, without giving anything away, I can say that this brilliant ending – the storyteller’s hard-won achievement – is similar to the ending of Vidor’s two other major works on the List. In The Big Parade, his World War I epic, our hero is traumatized by the war, he loses a leg, his two closest friends die – but he returns home in full possession of the maturity he so grievously lacked at the start. He also goes off into the sunset with a lover.

Same goes for The Crowd. Our hero in that movie starts out optimistic, young and capable, just like our heroes in Stella Dallas and Big Parade. That hero is also slowly worn down by the world, just nearly crushed by it, until, at the end, his wife gives him a second chance. It looks as though their marriage might work. The final shot shows them at a comedy show, laughing, fitting comfortably into the “crowd” from which he had worked so hard to extricate and distinguish himself.

King Vidor’s films address some pretty heavy topics, and he beats his characters into a tough submission, but he’s also showcasing a fundamentally optimistic attitude about life. Things don’t ever work out the way you’d hopes, he seems to be saying, but they do work out.