I don’t know what it is about the mid-1930s but I’m feeling pretty gutted by this trinity of Dodsworth, Stella Dallas, and now Make Way for Tomorrow – which Orson Welles, according to Peter Bogdanovich, said was one of the saddest movies he’d ever seen.

It’s about an elderly couple, they lose their house to the bank, and for lack of resources they turn to their four grown children for help. It’s clear that the kids don’t wanna take in their parents. They end up splitting the responsibilities. One kid gets mom while another, 300 miles away, takes dad. Separated, the elderly parents pine for each other in the most tender ways. When they’re finally reunited we’re led to believe that it’s only for one day, and that this day will be the last they ever spend together, and so they try to make the most of it with a long nostalgic date through the city. 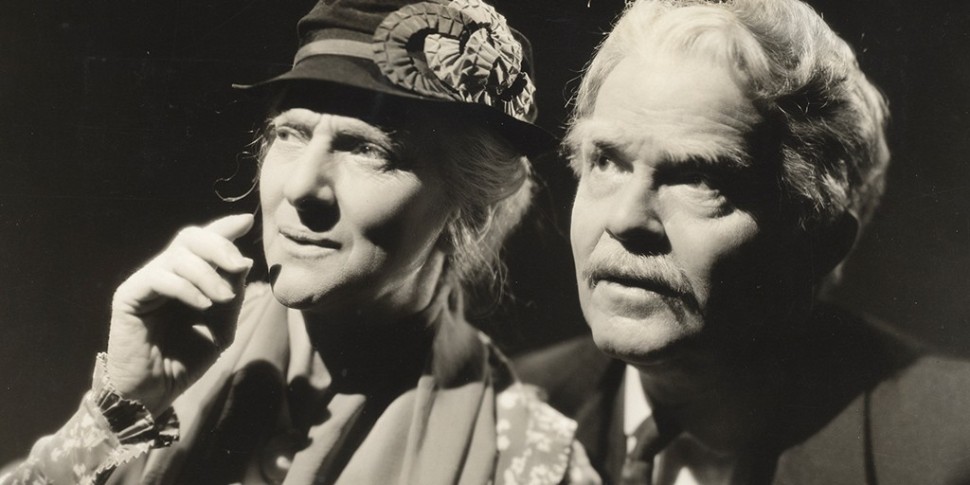 I saw this movie for the first time about nine months ago but I’ve just watched it again, because I forgot to write the essay (long story), and I guess it’s fortuitous that I’m getting to take this second stab at it because the “Honor Thy Father and Mother” thing, which is presented on one of the title cards, strikes a more poignant chord with me now than it did then, on account of what happened at my house just recently, during Hurricane Irma. My grandma (88) and great aunt (92) live in an apartment complex in Little Havana that’s kinda squat and blocky, tough-looking, not unlike a fortress. It’s also several more miles inland than our house. Out of what I think was a misguided sense of duty, my dad uprooted them from their apartments and brought them over to our house. Did the same with my grandpa, who’s 91. Also my grandma’s live-in nurse.

So the house was crowded. My great aunt, aphasic and senile and marginally continent, was stressed by the displacement and started wetting herself a lot and needing to be bathed. She wept at night about not being home and she fell out of her bed twice. Soiled diapers accumulated in a hefty bag n the bathroom. Once the power went out, and the room became hot, the smell of that bag – which was needed too often to really be taken out until it was full – smelled worse and worse. My grandfather showed that he’s way more frail than we realized, a wobbling gait sustained (precariously) with a cane that he routinely misplaces, drops, forgets about. He kept getting up and moving around, shuffling over a tile floor made slick with humidity, and when he slipped in the dark at 3 a.m. one day, everybody asleep, he revealed, later that morning, that he’d lain there beside his cracked lantern and wondered if this was the end.

My grandmother refused to get out of bed because there was no electricity to heat her cocoa. She also refused to drink water because she had to pee after only a few sips, which meant that she’d have to walk to the bathroom, and the weakness in her knees makes walking a struggle. The house was super  hot, though, and so after three days with virtually no water at all she collapsed and had to be rushed to the hospital, where her body temperature was like 105. They gave her fluids and held her for two days. She was furious that so few of the doctors were Cuban.

This lasted six days and my dad conceded before the end of it that this had been a bad idea, he should have left them at their building (which is decidedly safer), and mused that he’d brought them over thinking reflexively that it was the right thing to do. Maybe it was. But it was also miserable and dangerous, more ethical than practical.

There was also a big scandal down here that same week when a retirement home, having lost power after the storm, allowed eight or nine elderly residents to die of heat stroke. The people working there were depicted in the news, both from this scandal and others, as not giving a shit about the residents. Maybe they didn’t. Atul Gawande wrote a book about geriatric medicine and ethics a few years ago called Being Mortal and in it he writes of how it’s easy for medical professionals, and especially students, to become discouraged by geriatric medicine. You labor for the care of a patient who will never fully recover, whose death feels imminent and certain. Your efforts, your emotional investment in the patient and perhaps even the field, feels doomed, pointless.

I mention this not in defense of the people who worked at the retirement community, whose gross negligence resulted in the miserable and tedious deaths of people whose lives they’d been tasked with protecting, but rather because the firsthand exposure I’d just had, in that same week, to the extent of my grandparents’ needs, and the more dire ones of my great aunt, and the flustered efforts on my dad’s behalf to provide a level of comfort that had no hope of being sustained, added a new layer of understanding to my memory of Gawande’s book. These elderly members of my family seem to have reached a point where just being alive is a full-time job. The constant ailments, the duffle bag of pills, the daily crises. The obstinacy. The wounded pride – formerly independent people needing suddenly to be helped with everything.

One of my bosses is married to a mortician and he says that she’s got this long sequence of blackout dates in late December, early January, where neither she nor her colleagues can take a vacation because so many people die and need embalming. Suicides are a formidable part of that, people succumbing to the darker reaches of depression when they find themselves alone for the holidays or without a certain person, but mostly, he says, it’s just the elderly. His wife started her career in Colorado, where the winter doles out sicknesses that seem trivial to the young but prove lethal to the old, or it makes them more susceptible to whatever already ails them (the chronic, pre-existing pains made worse by the cold is probably another factor in suicides). But also, he says, it’s the will-power of the terminally ill. It’s just a strange thing, often observed by doctors, that a terminally ill patient will tell herself, “I want one more Christmas,” and then give it to herself. Die of her illness on December 26, or January 3, when the original prognosis was that she’d check out five or six weeks earlier.

What Make Way for Tomorrow illustrates is how displaced the elderly can feel in the modern day. It must have certainly been true in the 1930s, when these people so set in their ways were suddenly subjected to the Great Depression, losing everything, struggling to stay afloat when they’re no longer able to fend for themselves. But it’s gotte be pretty disorienting today, too. The digital landscape so unlike the more analog world in which they were raised, and forged their relevance.

It’s a rough movie all on its own, powerful and sweet, but there’s an added dimsnesion of heartache to be had for those who’ve been privy to the struggles firsthand.