The dissolving marriage at the heart of Dodsworth looks a bit like this divorce I just learned about wherein one party was several years older than the other. By maybe a decade. The younger party, middle-aged, was recently awakened to a new culture at the time that things began to sour, had just entered the workforce again after a long hiatus, and was beginning to feel stifles, almost panicked, by the calm-waters lifestyle that the older spouse had worked very hard to achieve — and in which said spouse, being older, wanted to luxuriate. There was a long period of brooding and resentment and spontaneous lashing out until the younger party decided to leave. But the freedom into which that younger party ran, headlong and exalted, turned out to be rougher than expected. Unforeseen hardships popped p, and continue to pop up, and there’s reason aplenty for either party to look bitterly on the other and say, “Look what you caused.”

And in Dodsworth we see exactly that. The self-aggrandizing wife, resisting her encroaching age with lies about being only 35, resists her husband’s quiet cerebral life, separates from him, and then returns when the life of a socialite proves cold — only to run off once again when she gets bored. She feels suffocated by his love and stability but ends up wounded whenever she flees for the more-alluring but turbulent waters of independence. When her husband, Sam Dodsworth (Walter Huston), finally goes off to pursue a better-suited mate, somebody who’d appreciate him and who’d enjoy a life as tranquil as the one he wants, it’s clear that the audience is supposed to see it as a triumph, a happy ending, and to feel gratified that the bitchy, fickle, narcissistic and wildly insecure wife is being left to fester in the consequences of her actions. 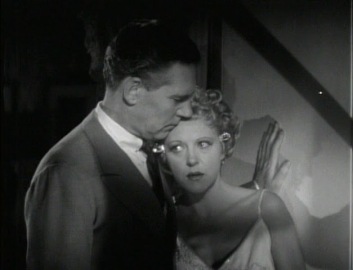 Real life is a little more complicated. The indecisive and unfulfilled wife, played by Ruth Chatterton, is — for all of the heartache and trouble she causes — a wounded person. She values certain things, like culture and travel and socializing, and as she grows older, and the sense of security afforded by her beauty begins to wane, she panics at the thought of having enjoyed so few of those things. She wants to gorge on that lifestyle because she feels she may never have another chance.

But this lifestyle proves deadening, and cold, fraught with rejection and drama. It hurts her, but after a quick reprieve from its hardship she flies back to it, again and again, trying to finally have what she’s always wanted and fighting the painful reality that she was wrong to ever want it in the first place, that it isn’t what she thought it would be.

Dodsworth is one of my favorite movies from the List so far, I’ve watched it twice now, but it’s a one-sided narrative, extolling the virtuous complacency of the man while wagging a finger at his wife’s restless and reckless quest for fulfillment. I like it anyway.

The second viewing made me particularly appreciative of the movie’s opening shot, which is the one used by Steven Jay Schneider in 1,001 Movies You Must See Before You Die and which I might be keen to blow up and put on my wall: Sam Dodsworth, looking like a spry older guy of maybe his late fifties, is looking out upon the vast auto factory over which he’s presided for years. He’s leaving it behind for retirement.

But it’s a pointed retirement. He and his wife, Fran, will be spending six months in London, where he intends to “let things happen to me.” He feels that he needs a repreive from being a boss, ordering people around, having control over everything. (I won’t go all-in with the digression, but Dodsworth himself just got me thinking of a terrific book called The Other Side of Desire, about paraphilias. Like fetishes, profiles of out-of-the-box turn-ons. Its opening chapter details the workings of an S&M dungeon in a Manhattan basement, I think it’s located on Wall Street, where older white guys, millionaire business dudes who trade in nine-figure deals all day and have the weight of a company on their shoulders, come to get spanked and horsewhipped and gagged, ordered around, tied up and made to worship the mistress. Sam Dodsworth seems like the sorta guy who’d pay for this.)

There’s a lot going on in Dodsworth that sings to stuff going on in my life at the moment – not least of which is its argument that, as Philip Roth would put it, other people’s weaknesses can hurt you as much as their strengths. There’s also the idea of what Dodsworth himself is trying to do with his retirement: he wants to enrich himself. He wants to study English culture. He’s a zealot for learning. On a cruise across the pond, for example, he gets worke dup with excitement about the fact that, with the captain’s guidance, he can see the beam of a distant lighthouse cutting through the fog. He rushes his disinterested wife and her paramour up to the deck, against an icy evening breeze, to get a look at it for themselves. They tell him, basically, to enjoy his light,a dn then they leave him alone.

The obvious goal of the movie is to set Dodsworth up so that he finds romantic fulfillment with somebody else, but I was wondering – given his passion for learning – if he might not find a more total enrichment by just spending some time alone as a solitary explorer. Is a companion really necessary? I don’t think that the movie believes that a solitary life can be a good one.

Reminds me of a documentary I just watched called Becoming Warren Buffet. A series of interviews with the billionaire octogenarian and his loved ones show that he’s a loner, not exactly cold but definitely removed, emotionally, from a lot of what goes on around him, and that the greatest joy in his life is (and always has been) learning. Still, in his eighties, he spends several hours a day just sitting around reading. The same thing happened to him as happens here in Dodsworth: after a few decades of marriage his wife got restless, hungry for culture and spontaneity and activism, and left for San Francisco. They stayed married, and appear to have sustained some sort of romantic relationship even while, in her absence, Buffet lived in open romantic comfort with another woman. That first wife has since died, and Buffet is currently married to the other woman.