Yesterday was Christmas, first one since my parents’ divorce, and it was fine, packed with family nearly all through the day, but it was definitely also weird. Sad in a way that was easy to ignore. My dad has suddenly gotten into “Hallelujah” and so we had a nice chat about Leonard Cohen over breakfast, which was a gift in itself, and then my brother came over and we spent the day eating and watching TV. Eventually my brother left and my dad went to his room and I watched My Man Godfrey in the living room where, normally, there’d be piles of opened boxes and crumpled wrapping paper, needles from the tree, torn envelopes and greeting cards ajar on the table. None of that this time.

I think I’ve definitely reached the point where this Project oscillates between hobby and job because I really didn’t feel like watching this. I wanted to play Candy Crush and listen to a podcast until I had to go to a Christmas party at 8 and see my mom. But I sat and watched it anyway. 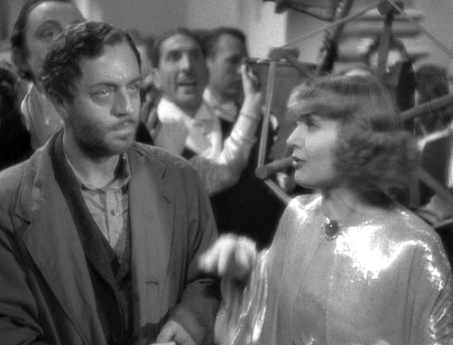 My Man Godfrey is about a “forgotten man,” which was the nickname affixed to people ruined by the Great Depression (usually when that ruin was compounded by their experience in World War I), who’s living in a trash heap among other forgotten men before he gets hired as the butler for a wealthy but unbearably eccentric family. One of his employers develops the hots for him, and he dodges her. There isn’t much to it.

At the Christmas party with my mom’s side of the family I touched base with cousins I haven’t seen in maybe a year and after a couple drinks I responded to everybody’s questions about what I’ve been up to with a straightforward answer about the restaurant, working the front desk with teenager superiors, and if they asked about my responsibilities there I said that I walk people to their tables and clean windows and bathrooms and menus. Felt pretty content to be talking about it.

There’s a scene in Godfrey where the aristocrats are hosting a party at which Godfrey is working as butler. Somebody shows up who recognizes him. Turns out it’s his roommate from Harvard. They get lunch together later and when the friend voices his exasperation at what Godfrey’s doing, Godfrey says, “I’m proud of my job.”

The friend, incredulous, says, “Proud of being a butler?”

Godfrey says, “Proud of being a good butler.”

My own college roommate, E., was in an academic fraternity for aspiring entrepreneurs. He told me about a visiting lecturer, a CEO, who had a great success story. The guy had literally started in the mail room of his building, forty years ago, and then climbed up the ladder, occupying some dozen-odd positions, before he was finally running the show. After telling the story, during the Q&A, a frat member asked him, “What advice would you give to somebody who wants to reach the top as quickly as possible?” According to my roommate, Mr. CEO was peeved at this.

“Here’s the problem with your generation,” says the CEO, “you wanna run the show before you even understand it. When I started working in the mail room I was your age and obviously I didn’t see myself sorting envelopes for the rest of my life but I also wasn’t clouding my head with ideas of where I should have been, or where I deserved to be. I did my job as well as I possibly could. It’s what I did in every position I ever held. My dedication is what got me recognized. Not my ambition.”

So ahdunno. I’m overqualified for this job at the restaurant, but I’m also not gonna look down on it. I’m lucky to have gotten this gig at all and I admire everybody who works in the business alongside me. It isn’t easy. It’s humbling and taxing and painful in a dozen different ways. But at the end of the day I think my dedication is something to be glad about. Proud. Why not. And My Man Godfrey helped me to see it.