One of the major themes in Bret Easton Ellis’s fiction is the risk of caring about somebody and the way that our loyalty to a toxic person (usually a relative or childhood friend, somebody with whom the bonds are too deep to negotiate) can destroy us. I remember somebody on reddit saying “you don’t have to set yourself on fire to warm the people around you” and that’s exactly what Ellis’s characters do. Especially the women.

All of his narrators are tormented by how beholden they are to somebody who doesn’t deserve their affection; and increasingly, as Ellis gets older, we see, more poignantly, the inverse: our narrator is the recipient of a love he doesn’t deserve.

December 2016 saw Ellis’s directorial debut in a feature called The Deleted, released in serialized form on a streaming service called Filmsquare. I’m noticing as I watch it that there’s a copy of Less Than Zero, Ellis’s literary debut, on somebody’s nightstand, and that it’s Ellis’s voice off-camera in an interrogation scene (a little nod to De Palma). I’m always excited to spot these things. Easter eggs thrown in for a viewer who’s familiar with his work. Gifts for a fan.

I’ve told the story of how I discovered Ellis’s work so many times in conversation that I’d rather not get into it right now except to point out that I was fourteen and I wanted to be a writer and I’d never read a sentence so long as the one that opens American Psycho. Or Rules of Attraction. Or Glamorama. And so, being eager and young and impressionable, his work cast a spell that it might not have cast if I’d discovered it ten or five or maybe two years later.

My affection for Ellis’s work has so much to do with my high school years that I don’t know whether to trust that affection, like whether I can share it with people, or is it too personal, too circumstantial. The story of how I grew up, and how my sensibilities took shape, is, in part, the story of how I interpreted Ellis’s stories. My idea of the authorial entity Bret Easton Ellis (which probably bears little resemblance to the actual man) honestly feels like an imaginary friend from those years. It isn’t that this author figure can do no wrong in my eyes. It’s more like I’m just always in his corner when it comes to the assessment of his work, pleased to see that he’s keeping busy, interested in what he makes and rooting for him to succeed.

Bret Easton Ellis’s directorial debut shows promise and it’s enjoyable but, again, I’m not sure I’d recommend it to anybody because while the pacing is just as swift and smart as it is in his novels, and the nudity’s great, I think the camera (which otherwise glides with smooth and constant motion through almost every scene) gets too stagnant when he films dialogue, flat shots of not-great actors trading lines in the same dour and agitated tones, and I think that the whole movie might actually be undone by the very awful acting. But is that the director’s fault? There’s an argument to be made that a great director can fashion a great performance out of a stone, that they can take the Hitchcock approach and treat the cast like cattle and tell the story through the camera and the editing alone; but I think it’s more reasonable to say that, however great the director, a film is only as good as its weakest link.

Or is that me being an apologist because I’m such a fan of Ellis?

I’ve read each of his six novels more than once. I’ve read the most recent one, Imperial Bedrooms, four times. Ellis is obsessed with the image of youth and beauty, and he films it in The Deleted with earnest appreciation (longing?), but I think his best work comes about when he drifts away from youth and addresses, instead, the concerns of ageing. Glamorama, published in ’99, is his Big Difficult Novel and I like it a lot, think that it’s maybe his peak effort as a Writer’s Writer, but I prefer his two later books, Lunar Park and Imperial Bedrooms, wherein his narrators grow, along with Ellis, into their forties and fifties. There’s heartbreak in these two books that I find really powerful. The endings are moving. 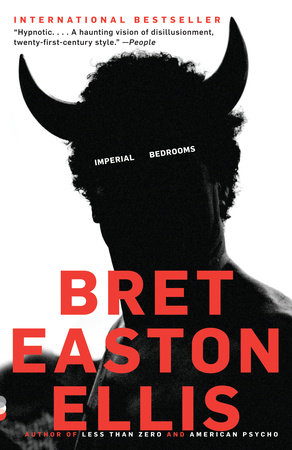 I recommended Lunar Park to a friend named Lea and she told me it was one of the best novels she’d ever read and so I recommended it to another friend named Liz and she got halfway through before telling me she’ll never take my recommendation on anything again.

My affection for Ellis’s work and persona poses three issues, as I see it

Are these problems, from a critic’s perspective?

I met Bret Easton Ellis at a cocktail thing in South Beach a couple years ago and since people were for some reason leaving him to himself on the balcony I went and talked to him about his podcast, told him I’d read all his novels several times over, tried to showcase my admiration without being weird. Probably failed. Anyway. I was resisting the urge to tell him how great it all is, how much it’s influenced me, and that it’s all genius. All of it genius genius genius.

When, in reality, if you give me a drink and sit me down and ask me about it I’ll probably tell you that, yes I love them, but Rules of Attraction is a bit of a mess, and Glamorama crawls up its own ass at times, and I’ll get pretty scathing about The Deleted.

I got drunk at the open bar and bought another copy of Imperial Bedrooms so that I could have something for him to sign. He autographed it and we got a picture together and I left.

I sometimes pay money to enjoy, and seriously consider, the work of bad people. (Not saying Ellis is one of those people, but just go with me for a minute.) I then get anxious, though, at the backlash that might come of giving serious consideration to the work of somebody who’s considered a bad person.

Is it a moral failure of the critic that she should focus on the work itself and ignore the crimes of the artist? Is it possible to really appreciate a work of art if you have strong feelings of hate or anger toward the artist?

How about strong feelings of affection, nostalgia, warmth?

When I was 21 I went to a Leonard Cohen concert, got there super early, hung out at the bar by myself, looking around, and then sat in the concert hall by myself, looking around, and eventually I realized that I was the youngest person in sight. Also probably the most excited. Most of the people around me looked like they could take it or leave it. Texting during the show, talking.

This happens, I’m told. You get older, accumulate responsibilities, there’s so much going on in your mind and life at any given moment that it’s just hard to be as transported by art as you used to be.

Whenever Ellis releases something, I get excited. Count down the days til I can buy it. I’m 26, and it’s something I’d like to hold onto.

An avid moviegoer who likes to talk seriously about movies is compelled toward the medium, most likely, out of a love for it, a love that predates and underscores their critical faculties. In my more forgiving moments I embrace the fact that all criticism is a manifestation of love for the medium and thus (inherent to anything love-based) it’s flawed. It can make you strangely angry when a movie disappoints and weirdly exalted when it succeeds. You can end up pulling punches or coming down way too hard.

Is a critic stripped of her legitimacy, then, when biases show up? Should a writer recuse herself from heavy discourse about a certain artist if her fondness for that person runs too deep to be reconciled with a purely critical approach?

I’ll tell you flat out that you probably won’t like The Deleted, because I’m coming to terms with its faults and learning to assess it as a movie as opposed to Bret Ellis’s Directorial Debut, but I’d have a harder time telling you whether to read Imperial Bedrooms or Lunar Park. It’s one of those situations where I can’t really give you a critical verdict so much as tell you how I feel about it.

I have a hard time talking critically about Ellis, and about Quentin Tarantino and Henry Miller and Martin Scorsese, but it’s a healthy challenge, it’s constructive, prompts me to confront things about myself and my biases and why I like the things that I like. They’re artists who became such influences at such formative ages, looking at them critically is like rating your friend’s appearance.

What’s skill got to do with good company?