By the time Warner Bros adapted Rafael Sabatini’s bestselling 1922 novel Captain Blood in 1935, movie studios all over the world had been engaged for many decades in the dubious endeavor of somehow transmuting beloved books into an entirely different medium.

It should be immediately admitted: an aggressively antagonistic medium. On the surface, reading a book and watching a movie might appear to have similarities; both seem a bit gaudy as a way to spend two hours, both are intended to be immersive, both are essentially passive, and at their best, both convey directly into the recipient’s brain the world-view and aesthetic realities of their mastermind creators.

The two forms look like first cousins, but they are mortal enemies (like most first cousins, come to think of it). In a way that all die-hard readers have experienced but virtually none, if pressed, could express, books are a cloistering experience, deeply private and therefore infinitely elastic. They not only compliment solitude, they enhance it, they transmute it into a singularly wonderful form of companionship. And because their interactions are entirely telepathic, often conducted across a staggering void of centuries or even millennia, the experience of reading is as varied as there are readers. As Gene Hackman’s hammy Lex Luthor says in Richard Donner’s 1978 movie Superman, “Some people can read War and Peace and come away thinking it’s a simple adventure story. Others can read the ingredients on a chewing gum wrapper and unlock the secrets of the universe.” In this as in all things, Luthor knew what he was talking about.

The opposite is true of movies. They are communal. They are loud – even, maybe especially, the silent ones. They are coercive. And they are, within fairly narrow parameters, fairly solid objects. Different movie-goers might like different things, but nobody can come out of “Werewolves of London” thinking they’ve just seen a nature documentary. Nobody can come out “Die Hard” with a sleepy pulse. The snootier cinema fans might cite the endless Nordic serenties of Bergman, but the awkward truth is that all movies are Baz Luhrmann’s “Moulin Rouge!” – frenzied, melodramatic, slightly cracked in the head, and fundamentally assaultive.

Given this gap, it’s somewhat amazing that anybody ever thought it would be a good idea to try to trap a book on-screen, and yet it was virtually the movie industry’s first idea, and that industry has been at it ever since. 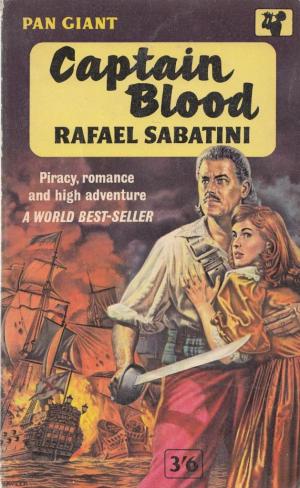 So: long before 1935, Hollywood knew not only the friction of adapting a popular book to the screen but also the allure (indeed, Warner Bros itself knew the risks precisely, since they’d already adapted this particular book as a silent film in 1923). Sabatini’s novel tells the story of Blood, who’s peacefully withdrawn from an earlier life of adventure and is living quietly as a doctor in a little English village, tending his patients and his geraniums, happy to be off the world’s stage. He’s so peaceful, in fact, that he sleeps right through the nearby Battle of Sedgmoor, in which the forces of King James II routed the rebel army assembled under the banner of the Duke of Monmouth, Charles II’s charismatic bastard son.

Blood only wakes up when somebody comes pounding on his door; a local boy wants him to hurry to the house of a lordling who was wounded in the battle. Blood sees no danger in helping out – after all, he declares, this is Christian England! A wounded man is in no danger of being seized off his sick-bed by his enemies (“He still had, you see, illusions about Christians” we’re told). But he’s wrong: not only do they seize his patient, they seize him too for giving aid and comfort to a rebel. Blood is spared from a traitor’s quick death by being sold into slavery in Jamaica, and although his life there is comparatively comfortable – his doctor’s talents make him popular with the Governor, who suffers from gout – he yearns to be free. And in time, he takes his freedom in the form most immediately recognizable to every 8-year-old boy in the Depression era: he becomes a pirate. He has many adventures with his vicious partner, Captain Levasseur, and his loyal men – most of them his freed fellow slaves – and when an English ship carrying Arabella falls into his hands, the rest of the plot slots neatly into place: Blood woos the lady, kills Levasseur in a duel, returns to Jamaica, and in rapid order becomes a happily-married and thoroughly respectable governor.

The story has all the basic elements virtually guaranteed to attract the roving talent-scouts of Warner Bros studios: a strong male lead, wronged and upstanding against injustice, a wide scope of adventure, and a redemptive story-arc. It was, in other words, a star vehicle.

The problem: no star wanted to do it. The studio’s first round of candidates – well-known names like Robert Donat, Leslie Howard, and Clark Gable, were either disinclined to embark on a big adventure picture or somehow seemed a poor fit for the part of Peter Blood. Likewise the second round, and the third. But all the while these worthies were passing in and out of consideration, an unknown was gaining traction: a young and extremely handsome Englishman named Errol Flynn was attracting the attention of casting directors for his auditioning enthusiasm (and was, rumor had it, attracting the eye of Jack Warner’s wife for slightly less thespian reasons). Eventually, the studio cast him as Peter Blood, and to this gamble they added another, casting another unknown, Olivia de Havilland, as Arabella. In part to counterbalance this, the stalwart Basil Rathbone was cast as Levasseur. 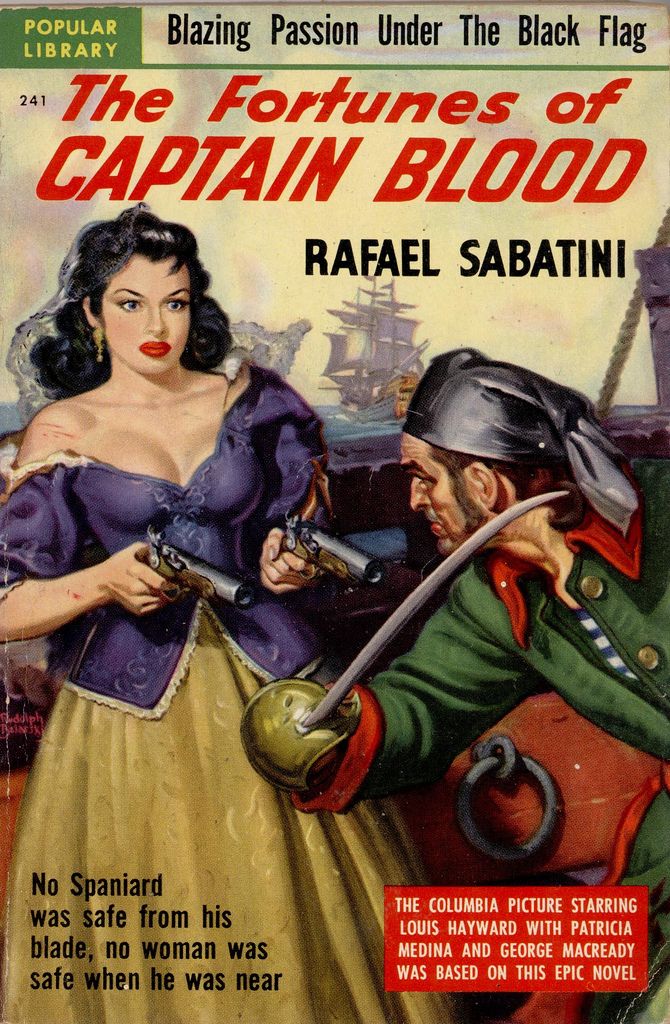 By the time he wrote Captain Blood, Rafael Sabatini was a practiced hand at creating the kind of plummy, overheated historical potboiler a demoralized reading public very much liked. He’d been born and raised in Italy, turned to writing novels in 1902, and cobbled Captain Blood together from various previously-published adventures of the character. But despite his undeniable skill (unlike the vast majority of his book-contract hack peers, his prose is still delightfully readable a century after it was written), Sabatini could woolgather, and his gestures to the antique language of Sir Walter Scott make his most famous novel read like a period piece in search of a period. It’s no disloyalty to the author to point out that the surgery done upon the novel by the Warner Bros team – director Michael Curtiz, screenwriter Casey Robinson, and half a dozen anonymous dialogue-tweekers – gave the already-healthy a trimmer build … and much greater longevity.

The movie certainly improved the lives of its players, two in particular: de Havilland and Flynn were overnight transformed into A-list Hollywood celebrities, and their on-screen chemistry in every shared scene of Captain Blood instantly had viewers calling for more (the two would go on to star in eight movies together). And even watching the movie afresh in 2017 (the Thousand Movie Project trades in no nostalgic trips down Memory Lane! New viewings are rightfully demanded!), that chemistry is striking: despite the somewhat creaky dialogue – not entirely Sabatini’s fault, since it was and still is the lingua frança of Hollywood – their scenes glow with unforced vitality. And Flynn himself is throughout the movie nothing short of a revelation: he takes to the center spotlight as though he’d been born there. He not only disguises the nervousness he felt in dealing with a notorious tyrant like Curtiz, he somehow seems to tap into it, using it to make a by-the-numbers swashbuckling hero part into something utterly arresting. Watching him in Captain Blood, you don’t think, “That’s the lead actor.” You think, “That’s the star.”

Rafael Sabatini’s novels have long since fallen out of favor and will never regain it; even the idea of Hollywood ever remaking Captain Blood seems untenable. What use would the 21st century have for the heroic optimism of either the novel or its great film adaptation? And worse: which of the 21st century’s hard, brittle young actresses or squishy, foppish young actors would be anything but embarrassed in the shadow of de Havilland and Flynn? Yes, modern special effects would make the sea-battles more exciting, but what difference would that make when weighed against two leads whose only chemistry is pharmaceutical and whose only emotion-register is “impatiently wanting to fire a family member”?

But then again, Captain Blood has a charmed history. Who knows what industry-stunning star is even now lurching to the craft service buffet to be discovered?

Steve Donoghue is a writer and reader living in Boston. He reviews for The National, The American Conservative, The Washington Post, The Vineyard Gazette, and The Christian Science Monitor. He is the Managing Editor of Open Letters Monthly and hosts one of its blogs, Stevereads.