I’ve been feeling weird lately about the frequency with which, while watching and writing about these past few movies on the List, my attention goes toward my own ambitions, dread of failure, stuff like that. Morbid stuff. Been feeling self-conscious about maybe projecting all these feelings onto otherwise enjoyable movies. Then, about five minutes into I Am a Fugitive from a Chain Gang, I paused the movie to check its release date (1932) and realized that these past few movies I’ve watched were all made during the Great Depression, and prohibition, and that, given the toils of the times, it probably isn’t impossible that a vein of nihilism runs through them. A feeling of defeat. So I figure it’s possible that my constant digressing into morbid stuff isn’t so much a product of my disposition as it is just a natural result of being saturated in movies made in this era.

I Am a Fugitive starts with James Allan (Paul Muni) coming home from the Great War, decorated for valor, brimming with a newfound interest in engineering. Construction, architecture – anything in the field, really. He’s telling people that he wants to give back to the community, build things, exercise his creativity. His brother, however, has arranged for Allan to take up his old job at the factory. Wants to shoehorn him back into complacent civilian life. Aspirations of comfort rather than greatness.

And that’s fine, of course, doing what makes you happy with no interest in fame or power or whatever. We probably glorify those attributes too much these days. I dig where I am at the moment, the uncertainty about where I’ll be in six months or what I’ll be doing, but I had drinks with my friend Bob last night who’s recently married and he was telling me about his wife going to the dentist, sans insurance, and that while the bill was only like $100 he got to thinking hard about insurance. And coincidentally, I’m talking at the moment to a woman on Tinder who’s 28, she teaches English at a private school nearby, and she said that for all of her passion about teaching she’s swayed mostly toward the job by its insurance. My dad has expressed a few times now that he’s on eggshells whenever he wants to talk to me about shit like this because I get so mad. I’ll mention something about this Project, for instance, and he’ll nod with a smile, quelling his disinterest, and then he’ll ask after a few seconds of digressive silence if I’ve given any thought to the fact that I’ll be off of his insurance in a few months. I bristle at this for probably the same people I tend to only date people who are three or four years younger than me: it’s unpleasant, when your life isn’t in great order, to share the company of people who put a mirror up to your face, who ask you – constructively or vindictively – to confront the urgent status of whatever responsibilities you’re neglecting. 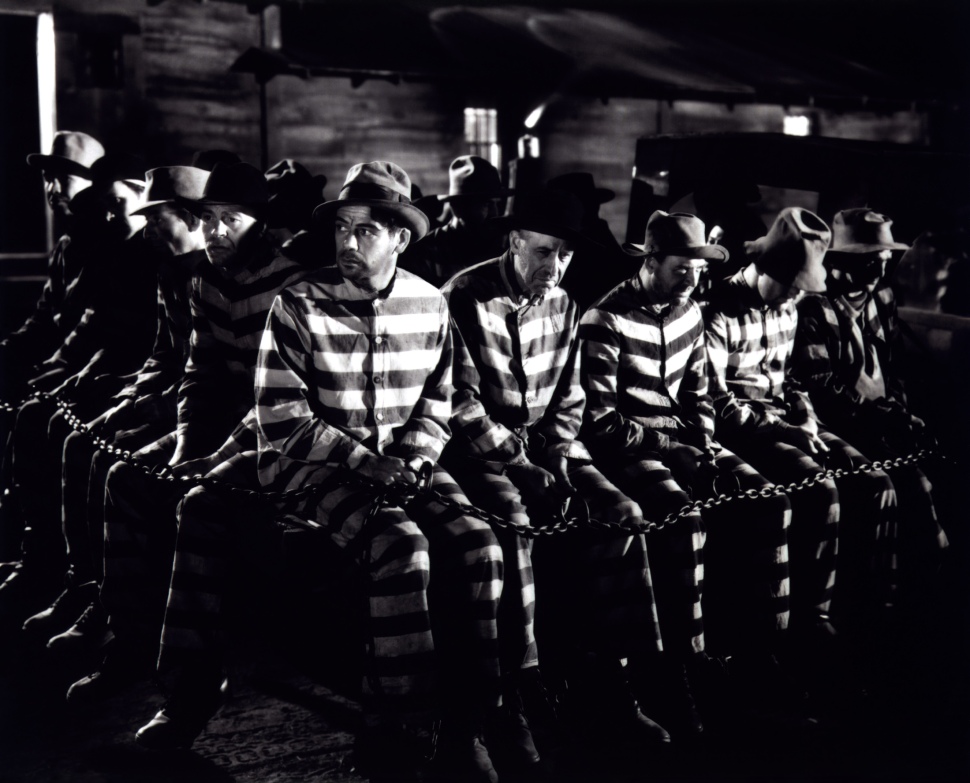 Anyway. So James basically sabotages his job at the factory so that he can have an excuse to roam the country, get away from his family, and pursue the sort of work he actually feels a passion for. It doesn’t go well. He becomes a bum. There’s a moving scene where he steps into a pawn shop to hock his war medal and finds, in the display case, a whole pile of them. One quick image that says so much.

James is eventually suckered into aiding a robbery. He’s sentenced to ten years of hard labor on a chain gang. The scenes of their work are beautiful precursors to Cool Hand Luke. It’s got echoes of the labor camp section of Suttree, by Cormac McCarthy (my favorite novel, btw).

Eventually he escapes to Chicago and becomes a bit of a tycoon, a widely-respected engineer, and shit’s going great again until his fugitive status is revealed.

Something the movie effectively captures, and that I don’t think I really got savvy about until I entered the workforce and made friends with people twice my age, is that failure, defeat, and financial ruin are not fates reserved for the slothful alone, for selfish folk and tricksters, but rather that there are tons of virtuous and hardworking people who are destroyed by circumstances, by illness and bills, freak accidents. William T. Vollmann, in his book Poor People, lists “accident proneness” on his list of factors that contribute to poverty.

Some people, by no fault of their own, have a genuine propensity for finding themselves sin the wrong place at the wrong time. Good humble people who toil in earnest. The sweep of misfortune’s sword is indiscriminate, blind, but it’s enough to make you think that if there’s a God overseeing this whole show, pulling the strings, that Her sense of meaning and purpose is a half-realized thing, and she Forgets it, or doesn’t care.

That’s certainly the vibe that comes across here and that I’m guessing will make even more of a presence in movies to come, as Hollywood moves deeper and deeper into the Great Depression.