My phone’s history is peppered with porn, unfortunately, but I swear it started as an accident, last month, when I downloaded the reddit app to talk more regularly on the movie forums. Here and there I’d just stumble upon something and I guess idleness got the best of me and I wound up on gonewild. It happens. But so now whenever I’m at Starbucks (as I am right now) and need to connect to their wi-fi (as I just did) it’s always with sighing, shamefaced, beleaguered resignation that I agree to their Terms & Conditions – which I of course haven’t read, but I suspect it grants them carte blanche to parse my ugly delights and blackmail me when I become a senator.

The reason I was just now connecting to the wi-fi, before getting to work on the essay, was to do some research about Prohibition so I could maybe write something a little more substantive about The Public Enemy, which is about a criminal named Tom Powers (James Cagney) and his friend Matt Doyle (Eddie Woods) who climb the ladder of organized crime by supplying booze to various speakeasies in the 1920s. I should have done the research before watching the movie but apparently I couldn’t be bothered to stop masturbating. What I did learn about Prohibition (though it didn’t really influence how I looked at the movie) is that a surprisingly huge part of the country supported it at first. World War I was a contributing factor, the idea that all the barley used in beer could instead be put toward making food soldiers. But also, more simply, lotsa folks were swayed by the idea that booze makes people unproductive and violent.

Paul Auster wrote a memoir called Winter Journal wherein he talks about how, when he was a student at Cornell, the dormitories were tryna get with the times and not be so strict about sex (this was the 1960s). So whereas girls might have once been forbidden from entering a boy’s room, they could now be there whenever they pleased – so long as the door stayed open.

Somebody complicated things: “How far open?”

“Wide open,” was presumably the answer. But with time and haggling the students got that space narrowed, and narrowed again, until the rule became that the door had to remain open by a book’s width – in response to which one student employed a matchbook for the purpose and, shortly thereafter, the college just gave up on the rule like, Fuck it, get pregnant, I’m done. 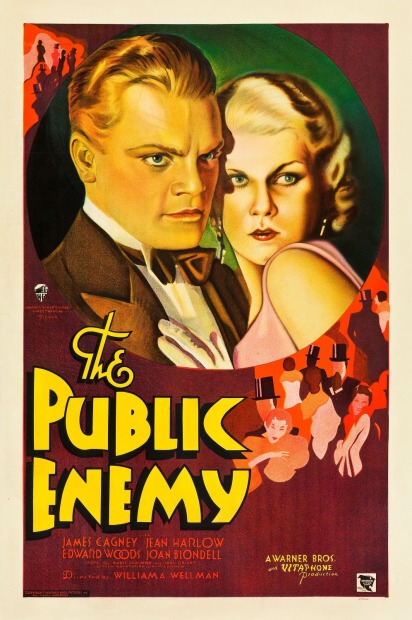 The Public Enemy is really good. I know it isn’t fair to judge these movies on the basis of comparison, to be extra critical of it because you once saw another movie on the same topic that did a better job, but I kept thinking throughout this movie of how much I preferred Little Caesar (1931). Not that Rico, Edward G. Robinson’s character in Caesar, is more likable or anything like that. Just that Rico seems a little more human. We see him humbled before luxury, and his own rising status, and there’re complicated relationships to explore between him and his best friend, Joe, and his right-hand Otero  – whereas with Powers, in Public Enemy, we’ve got a character fueled through crime by an absentminded pursuit of All of It. Surely there are criminals like this, and such a depiction was probably endorsed/forced by the Production Code of 1930, but finally it falls kinda flat for me.