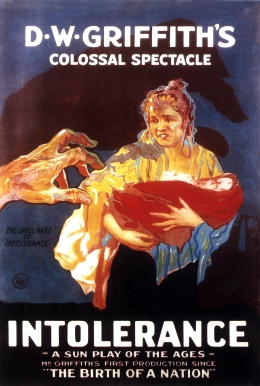 Intolerance is the first movie in the project that I’m sure I’ll watch again. It’s gorgeous and well-acted and beautifully-written. The intertitles are like prose poems. I’ll be watching it again, in part, because it’s too convoluted to catch the whole story with just one viewing — which I think adds to its charm — but mostly I’ll be watching Intolerance again because it falls into that strange category of artworks where the real subject is the artist’s own ambition.

Intolerance is massive. Griffith used something like 3,000 extras and built these enormous sets that are still really impressive a hundred years later. It’s interesting to contrast its scope and innovation with what was happening in cinema just ten years earlier. Shit — five years earlier. While watching Intolerance I took notice of costumes and set design in a way I never have. The power of a close-up or a slow and careful zoom have never been more apparent.

Griffith allegedly set out to make this movie because he wanted to redeem his reputation from the damage that’d been done to it with The Birth of a Nation — a movie that confirmed his genius as a filmmaker, and his power as a box office draw, but also outed him as the racist that, as I think Roger Ebert is probably right to point out, he didn’t know he was. And Intolerance, in the wake of that, does seem like the work of a big-hearted man — albeit very definitely a man. While the story reflects, at times, a pretty honest sympathy for plights unique to women throughout history it also suggests that most unhappy or vindictive women have turned out that way for lack of a man. That nothing ignites their frumpish middle-aged ire like realizing they aren’t sexy anymore.

The issue with these recitations is that I didn’t really mind my language. Like if the song said “fuck,” I’d say that. If it said “pussy” or “motherfucker” or whatever, I’d say it.

The inevitable way that this exploded in my face is when a classmate overheard me rapping (more like reciting the lyrics at some pace that I seemed to think was a rhythm) in the lunch line and, when I indiscriminately used the N word, called me out on it. I froze. She told me that it was fucked up of me to say that word. I gave the panicky, default, white guy response about how it doesn’t mean what it used to mean, that it’s fine now, and she told me that I may not think that it means anything but that it does mean something. She told me that the word’s history was not my history and that nobody had (or ever would) spit it at me, try to use it to bring me down, and that I would therefore never know its power and so I needed to stop. Said this in simpler terms, obviously, but that’s the gist.

She scared the shit out of me. Which is good. I was humiliated and contrite and I did my best to avoid her for the rest of high school even though she was always friendly to me thereafter, said nice things to me in the stairwell.

The reason I’m immolating myself by revealing that story here is because it exemplifies a good type of intolerance: the intolerance of intolerance. Griffith touches upon it lightly here. The girl who called me out was, by nature, very friendly and pleasant and chatty. Liked by all.

In the hallway she hugged her textbooks to her chest and moved from class to class at a quick stride that made her almost a caricature of the kindhearted ambitious teenager. Volunteer hours through the roof. But that image of her constant pep, her all-embracing optimism, strikes a sharp contrast against the fire-eyed conviction with which she confronted me for doing something negligent and offensive. She was quick to stand up against my bullshit. Wildly intolerant of it.

I do think that the film’s enormity (which, in a way, is also its subject) is part of an effort to obfuscate The Birth of a Nation. More an effort to outshine than renounce it.

I’ve been wondering for a while about what Bret Easton Ellis is talking about when he refers to a movie (often a bad one that also happens to be expensive) as “pure cinema,” but I think I kinda get it now. He says it of movies like Batman v. Superman and Ridley Scott’s later efforts. I think the attitude behind it is this: movies are magic, a visual art, and the image (which is the basis for that magic) shall take precedence.

Of all the sub-plots to Intolerance, the best one by far is the simplest, the cheapest, and takes place in what was, back then, the modern day. Its other plots, while less coherent, are way prettier. Their thematic relationships start to feel pretty tenuous toward the end.

It’s spectacle for the sake of spectacle here. “Pure cinema,” I guess. Which is fine.